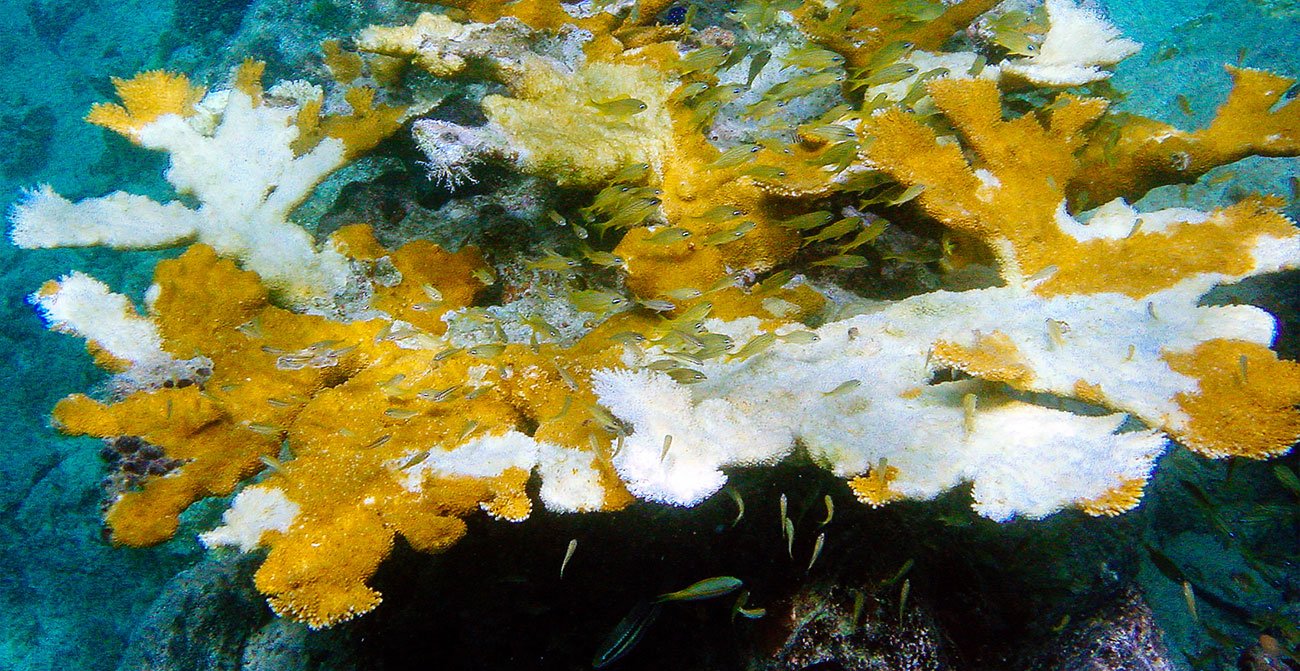 Faded brilliance – the loss of corals to disease

Updates B&ERP
On my first dive in Tobago a few years ago, I was stunned by the beauty of the coral reef; the colours of the stony corals and sponges, the gorgonians swishing with the waves and the multitude of playful fish careening about. After the dive, I was happily chatted away by the older divers who matter-of-factly told me that the reef I had seen that day was nothing compared to what it was like a few years before. Back then I was told, the reefs were covered in twice as much coral. So what happened to our coral reefs? Well a few things happened, some local while others were global. Forty years ago, Tobago’s reefs looked much different from how they do today. The coral cover of stony “reef building” corals was far more extensive, so much so that stony corals dominated the reef floor over all other reef organisms like soft corals, sponges and algae. In many reef areas along the leeward coast, the most abundant of these stony corals was the highly branched Acropora species, commonly known as Staghorn and Elkhorn corals. These complex structures were exceptional at providing numerous habitats for fish and other reef creatures. There was also a greater variety of stony coral species. But in recent years, stony coral cover has fallen dramatically to the point that on certain reefs on the northern end of the island, stony corals are no longer the primary organism on the reef and have been replaced by sponges or soft corals which are less capable of supporting the abundance of marine life that stony corals can. The previously abundant Acropora have been reduced to a few scattered colonies around Tobago, and replaced by simple mound forming stony corals. In addition, more and more coral colonies are being observed with diseases. The changes in the reef scape have been brought about by both chronic and acute stressor events working in tandem over the years. Climate change has for some time been the greatest threat to reefs since corals are particularly vulnerable to its effects. Sea surface temperatures rise [driven by climate change] during the year to temperatures high enough to cause corals to undergo thermal bleaching. Corals exist in a symbiotic relationship with microscopic algae called zooxanthellae and gain most of their nutrients from the zooxanthellae living within their tissues. When corals become sufficiently stressed they will expel their zooxanthellae, losing their colour and resulting in a pale “bleached” look. If corals remain without their zooxanthellae for extended periods of time, they die. These periods of high sea temperatures and the resultant bleaching episodes have begun to increase in frequency and now occur every few years. One such episode occurred in 2010 which resulted in the death of up to 50% of stony corals on reefs along the leeward coast of Tobago. Stony corals grow very slowly and many of the affected reefs have not yet regrown the corals lost in 2010. An additional effect of thermal bleaching is the onset of coral diseases whose infection rates typically explode a few months to a year following a thermal bleaching event. Coral diseases are becoming increasingly important, especially in the Caribbean, in shaping the reefscape as they are capable of killing whole coral colonies and have been known to wipe-out thriving coral populations. Acropora, which once reached 46% cover in Buccoo’s shallow reefs are now gloomily non-existent. This unprecedented loss is primarily attributed to a coral disease called White-band disease. White-band disease in not the only deadly disease plaguing Caribbean corals. The Caribbean region is known to have the greatest variety of coral diseases with almost twice as many coral diseases described in the Caribbean than any other region. Often the infectious agent is unknown but we do know that there are human pathogens capable of causing coral diseases. Many of the coral species around Tobago are vulnerable to multiple disease, and they are being observed with increased frequency throughout the year. Of current concern is the effect of Yellow-band disease on the Star coral, Orbicella faveolata, which is currently the most abundant species in Tobago. Some Star coral colonies appear not to be vulnerable to Yellow-band disease. Since these colonies may house different species of zooxanthellae, the Institute of Marine Affairs (IMA) is starting research to investigate whether there exists a genetic susceptibility of either this coral species or a specific zooxanthellae strain to Yellow-band disease. Sedimentation and nutrient pollution have also been changing the reefscape. Sedimentation can stress and kill coral and it reduces diversity in affected areas to species that are resistant while chronic nutrient pollution retards colony growth, deforms coral recruits [baby corals] and is known to worsen coral disease outbreaks. Many of our reefs – which support our fishing and tourism industries and protect nearly 90 km of Tobago’s coastline and beaches from erosion – are struggling with climate change, coral diseases and pollution. The reefscape is changing. It is becoming smaller and less bright but there is still a window of opportunity to reduce local stresses and give our reefs a fighting chance against the effects of climate change and coral diseases.   By: Rachael Amoroso Biodiversity and Ecology Research Programme Institute of Marine Affairs Photo credit Diseased Elkhorn coral Website: sero.nmfs.noaa.gov
Share
share

Status of mangrove forests in Trinidad and Tobago