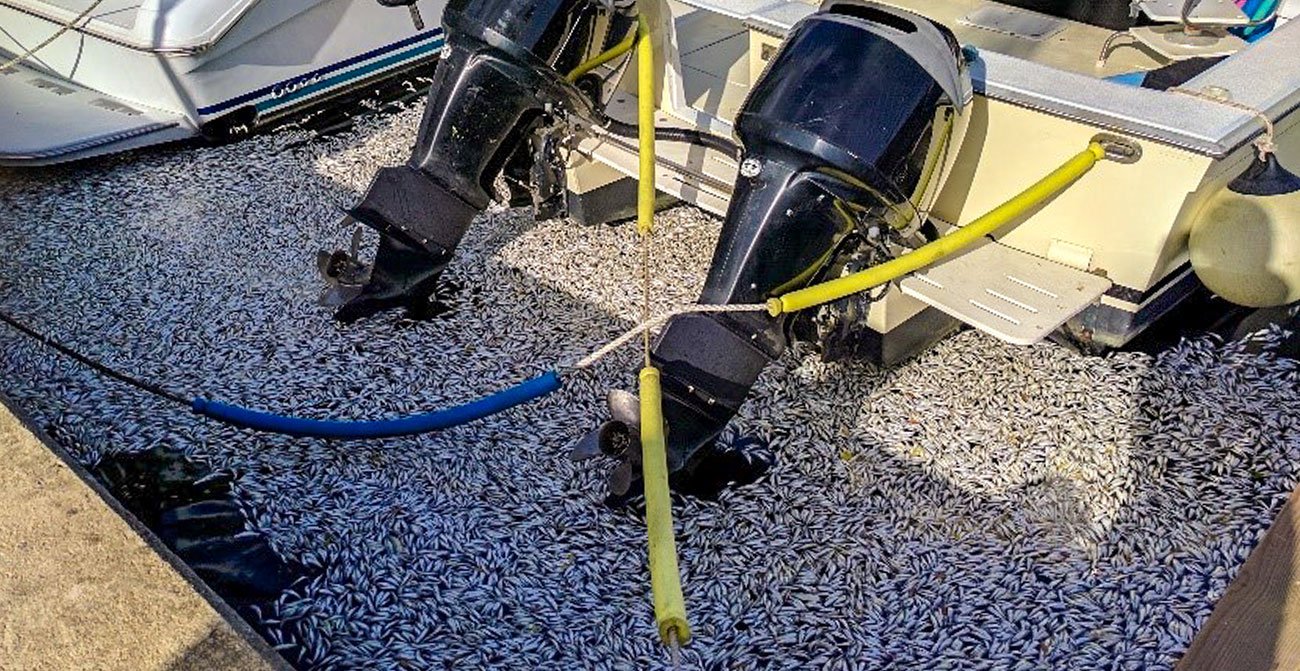 Bait Dump vs Fishkill in Chaguaramas

Updates F&ARP
The Institute of Marine Affairs (IMA) recently conducted an investigation into a reported fishkill at the Power Boats Marina in Chaguaramas on the 10th and 19th of May, 2017. Based on interviews, observations, and our knowledge of fishing practices in Trinidad and Tobago, it was concluded that this was a bait dump and NOT a fishkill. Whilst one of our main reasons was that there was an eyewitness that saw the fish being dumped, the physical and biological observations recorded were also clearly characteristic of a dump. Some of these characteristics and observations were: (1)The majority (99%) of dead fish were baitfish (sardines and herrings) Baitfish is the term used to describe a number of sardines and herrings that are used live by fishermen to catch other fish, mainly in a la vive fishing. Some of the more well-known ones are Jashua, the thread herring and the scaled herring. It is also what we may eat as “fry dry”. These baitfish are usually captured at night using bait seines in areas such as Las Cuevas, La Fillette and Chaguaramas. If one was to take a drive along the northwest peninsular, one would see the float lines of bait seines close to some of the more popular jetties. Baitfish are schooling fishes. A single school can comprise of thousands of fish. So, when baitfish is caught, it is usually caught in large numbers. This is why it is not unusual for a bait dump to comprise of thousands of fish. At certain times of the year (May to October) baitfish is caught in abundance, supply may exceed demand and the extra fish is discarded at sea by the fishermen as its commercial value is low. Baitfish is also caught as bycatch in the trawl fishery for shrimp. This fishery is very active in the Gulf of Paria. When the trawl catch is hauled into the boat, it is sifted through to remove the shrimp. The rest of the catch is known as bycatch. Some of this bycatch is taken to the market and some of it is discarded at sea. Species commonly discarded at sea include mullet, catfish, blinch, paoua, croaker, and baitfish. The Gulf of Paria is home to over 70 species of fish, including carite, kingfish, red snapper, cavalli, barracuda, pompano, tarpon, snook, bonito, salmon and cro-cro, just to name a few. It is also home to at least five species of shrimp that is exploited by the trawl fishery. It is highly unlikely for a contaminant to be so specific that it kills only one or a few type of fishes. The argument that it is the bottom fish that are affected by the contaminant does not hold credence since baitfish is a pelagic fish similar to carite and kingfish and can simply move out of the affected area. (2)All the fish were dead. There were no dying fish i.e. fish gulping for air at the surface, which would indicate that a contaminant was present in the water and that the kill was an on-going event. (3)All the fish were in a similar state of decomposition. This would suggest that all the fish died at the same time or was discarded at the same time. (4)Together with the dead baitfish, there were also a FEW other fishes. These other fishes were of low commercial value and were species that may be discarded as bycatch. (5)On our second site visit on May 19th, all of the dead fish were aggregated in a relatively calm area within the Power Boats Marina. The Gulf of Paria is a relatively shallow calm body of water and hence dead fish maybe trapped within the bay for several days being moved about by tidal fluctuations. Aggregations may occur in areas where water flow is almost null as was seen in this case. Also, the fish observed on this visit was clearly not new fish that had recently died. Most were in an advanced state of decomposition as evident by the smell and state of the body. Although not specifically noticed in this case, baitfish and other bycatch often bear net marks on their body as a sign of having been caught. In the recent past, the IMA has also responded to fish kills in the La Brea area involving mainly mullet together with several bycatch species. Once again, these reported fish kills were determined to be fish dumps having several of the characteristics listed above. In addition to this, there is a fishery specific for mullet that functions out of the Claxton Bay landing site. Fishing is mainly in the Gulf of Paria and may extend as far south as La Brea at certain times of the year. Mullet is of low commercial value and similar to baitfish, it is a schooling fish that maybe caught in large quantities at certain times of the year. When this occurs and the market demand is low, fish is discarded at sea. Many of these fish die and wash up onshore. In our investigations we have interviewed fishermen involved in the mullet fishery who have admitted to catching large amounts and discarding some at times that coincides with these reported fish kills. The problem of bycatch/discards is one that needs to be addressed by the relevant authorities. Also of importance is the responsibility for cleaning up the affected areas after such an incident. The Environmental Management Authority (EMA) and the IMA continue to recommend to fisherfolk, that the ongoing pratice of dumping by-catch or unwanted catch in the marine environment ought to be discontinued, especially given the negative impact this practice can have on fish sales and consumer confidence. The EMA and IMA also acknowledge important stakeholders who continue to provide information on any observed potential environmental emergencies. Members of the public are encouraged to continue making reports to both Agencies via: EMA: Tel. 680-9588 and 285-4362 or complaints@ema.co.tt IMA: Tel. {634-4292}   By: Farahnaz N. Solomon PhD. Institute of Marine Affairs
Share
share

Status of mangrove forests in Trinidad and Tobago