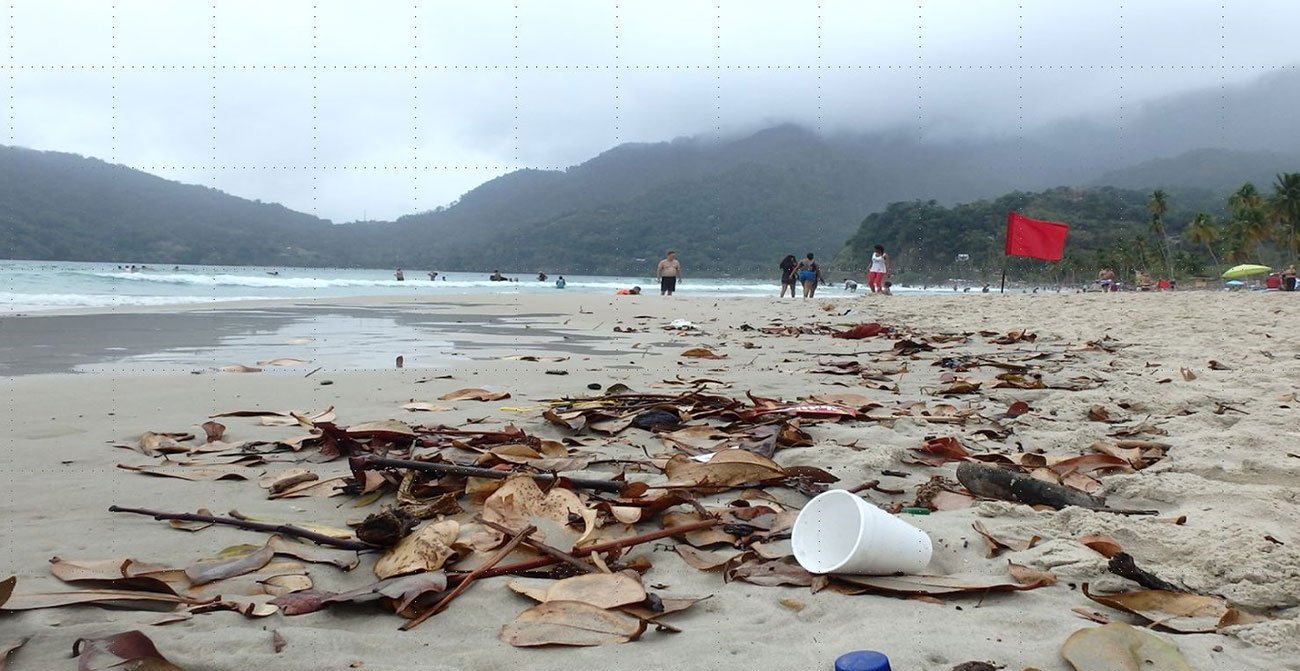 Trinidad and Tobago is blessed with a diversity of landforms such as rolling hills, expansive flood plains, mountains and rocky cliffs. However, one of the most popular physical features that we regularly enjoy is our sandy beaches. Beaches are formed from a build-up of loose sediments, usually sand or silt along a body of water. Sediments can settle from crashing waves, gusts of wind and streams of water. Sandy beaches are great tourist attractions, offering spaces for business, social events and personal leisure. They are important areas of recreation. However, during recreational usage, people may leave behind more than their footprints, sometimes unintentionally. At a beach lime, patrons may bring single use plastic plates, spoons, forks, toys, containers and bags. Improper disposal of these items or leaving them behind contributes to coastal debris pollution. Coastal debris can also transition towards marine debris if these items are taken by the sea.

One of the largest contributors to coastal debris is also one of the most widely used materials in the 21st century – plastic. Plastic was created just around 100 years ago. It is strong, light, cheap and highly accessible which makes it a wonder material of our age. However, these traits that make plastics a wonder material also make it a wonder pollutant. It seems to last forever but it breaks down fastest in sandy beach environments as most plastics would degrade when exposed to sunlight and wave attack against rough sand grains.

Plastic can breakdown from centimetres to micrometres and even to nanometres. To show just how small a nanometre can be, a strand of hair is around 80,000 to 100, 000 nanometres. This makes it especially difficult to remove from sand as it can be blown, buried, eaten and even transported to a whole new environment if left to the mercies of the coast. In the not too distant future, geologists will be able to see the 21st century in rock marked by pieces of plastic in the sediment layers of the earth.

Few creatures can eat plastic and break it down into more natural, useful materials. Seabirds, turtles and whales mistakenly eat plastic which can lead to discomfort and even death. Debris also causes entanglement which can also lead to death. Tiny pieces of plastic can get trapped in the gut where they remain causing discomfort or introducing harmful chemicals like persistent organic pollutants into living tissue. It is partly for these reasons; the number and density of marine life in the world’s oceans have declined. In some parts of the ocean, it’s more likely for a fisherman to get a haul of debris instead of fish. By the year 2050, The New Plastics Economy report has suggested that if all present conditions stay the same, there will be more plastic pieces in the ocean than there are fish in the sea. That’s not good news for the fisherman who relies on his catch to earn a living. There are ways YOU can help to combat coastal and marine debris:

1.Reduce, Reuse, Refuse and Recycle
Avoid one-time use of plastic items when possible when its use is optional. Refuse the use of plastic bags or straws if at all possible

2.Avoid products with microbeads if possible.
Microbeads are a form of micro plastics, which have been banned in the United States. They can be found in acne treatments, toothpastes and shampoos which make them hard to avoid.

3.Take part in a Beach or River Clean-up Activity
The International Coastal Clean-up has removed over 20,000 debris items from Trinidad and Tobago’s shores alone through volunteers!

4.Buy Bulk
Instead of buying 5 -500ml drinks. You can buy one 2 litre drink, save money and refill a drinking bottle. Larger plastic items are more likely to be removed by people from the environment and disposed of properly.

5.Use ‘Green’ Plastic
Less is more when dealing with a problem based on consumption patterns. “Green” plastics are made using petroleum and plant based substitutes to create a plastic product. This means that it took less fossil fuels and greenhouse gases to make the plastic material.

7.Adopt paper and more natural products
Businesses can try to adopt paper-based or more natural products to conduct operations and deliver services on a daily basis. The humble doubles man has been using paper due to its low cost and light weight when providing you with a meal. An added benefit is the paper, which he uses can be recycled and is biodegradable. In some communities in India, edible spoons have been introduced and have been well received.

8.Carry Garbage Bags with you. Do not litter.

9.Teach and Encourage Others to Use Reusable Products
Reusable products help curb litter in the environment and it can be more cost effective to do so.

Curbing Coastal and Marine Pollution
The Institute of Marine Affair (IMA), primarily an advisory body to the Government of Trinidad and Tobago, has been involved in many activities that will help curb pollution of our coastal and marine environments. The IMA is the Regional Activity Centre (RAC) for the Cartagena Convention – an agreement ratified by 25 other member states in the region meant to tackle land based sources of pollution which includes “floating” garbage. The IMA has also supported the International Coastal Clean-up Campaign which is run annually (usually September) by Ocean Conservancy, an international non-profit organization, dedicated to marine and coastal management. The IMA is also instrumental in developing the Integrated Coastal Zone Management (ICZM) Policy for Trinidad and Tobago. The Draft ICZM Policy 2014 has 11 main objectives all relating to the use, management and protection of coastal resources sustainably. Objective 10 specifically caters to promoting and enhancing pollution controls and waste management activities towards having as little negative impact on both human and coastal ecosystems and their ability to support beneficial human uses. The draft policy can be found online.

Combating marine and coastal debris is an international problem. However, we can reduce our footprints in little ways that will lead to a big impact. A cleaner sandy shore means more fun, more business and more pride for us. Sandy beaches are not just for us to enjoy now, but shared amongst the living animals that really just leave footprints and eggshells in the sand.