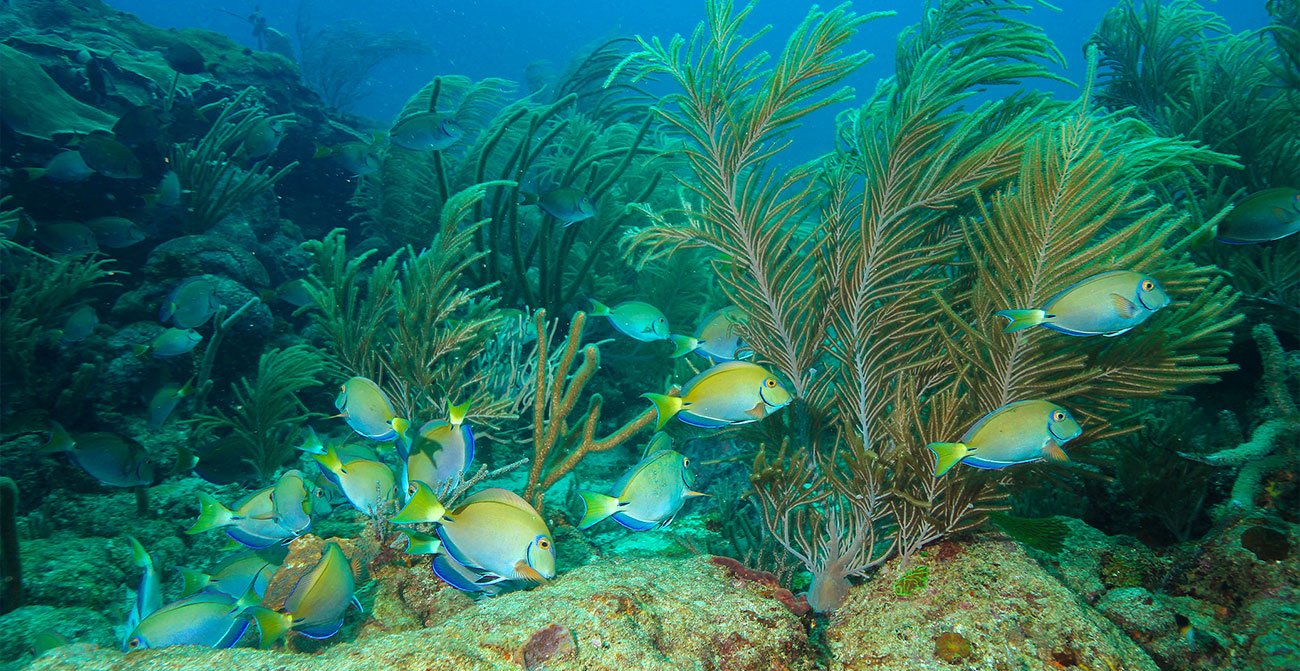 Updates O&CPRP
Over 4 billion years ago, life began in water. All life, including our own, exists because of the ocean. Despite the fact that more than 70% of the Earth’s surface is covered by seawater, it is often not realised how critical a role, the ocean plays in our daily lives. Let’s take a deep breath and dive into some of the essential services offered by the ocean. WEATHER AND CLIMATE The ocean has a major influence on the Earth’s climate because of its interaction with the atmosphere. It has the amazing ability to absorb, store and slowly release large quantities of the sun’s heat around the globe. Ocean currents help to distribute this heat by transporting warm water (with a lower salinity) surrounding the equator towards colder water (with a higher salinity) near the cool poles. The colder, saltier waters are heavier (more dense) and therefore sink while warmer, less salty waters rise. A continuous cycle of warm water rising and cool water sinking occurs. Heat exchange between the ocean and the atmosphere also drives the water cycle, and condensation of the water that evaporates from warms seas provide energy for hurricanes and tropical storms. DIVERSITY OF LIFE The ocean provides an extensive living space with diverse and unique ecosystems. The first organisms were single cell and microscopic, however over many millennia, these organisms developed and became larger and more complex. Over time they slowly evolved into the plants and animals we know on land and in the water today, and there are still many species yet to be discovered. Life ranging in size from the smallest living microbes such as viruses and bacteria to the largest animal on Earth is supported by the ocean. Microbes, which form the basis of all ocean food webs, are important primary producers and are responsible for producing carbon and oxygen on our planet. The ocean provides us with more than half of the oxygen we breathe! INTERCONNECTION BEWTEEN HUMANS and the OCEAN Being a major source of food, almost one billion people rely on fish as their main source of protein. Raw materials and building materials such as sand, gravel or gypsum are supplied by the ocean. It supports jobs and provides the ultimate highway for transportation of goods, people and international trade. National economies are supported by marine ecosystems- beaches and coral reefs- which generate income from tourism. The ocean is a source of inspiration to many people and offers opportunities for recreational activities such as swimming, snorkelling, diving, sailing and surfing. The ocean also has the potential to produce a significant amount of the energy that we need. Our Future During the last 50,000 years, changes in the ocean’s circulation due to global warming have produced large, abrupt changes in climate. Approximately half of the world’s population live in coastal areas and many are susceptible to natural hazards including hurricanes, storms and sea level rise associated with impacts from climate change. With increased carbon dioxide levels, the ocean is becoming more acidic, impacting animals such as corals and molluscs, making it more difficult for them to build their protective skeletons or shells. It is a reality that we humans are to blame for the incessant abuse of the ocean, from pollution, overfishing and global warming. For our continued existence, let us each care for the ocean as it sustains life on Earth. Individual as well as collective actions are essential to ensuring the future of a healthy productive ocean for all to enjoy and appreciate. The oceans are a resource which needs our urgent help to conserve for the future of humanity. By: Krystal Ganaselal Information Officer Information Centre Institute of Marine Affairs
Share
share