IMA > Updates F&ARP  > Royalty of the Sea- The Queen Conch 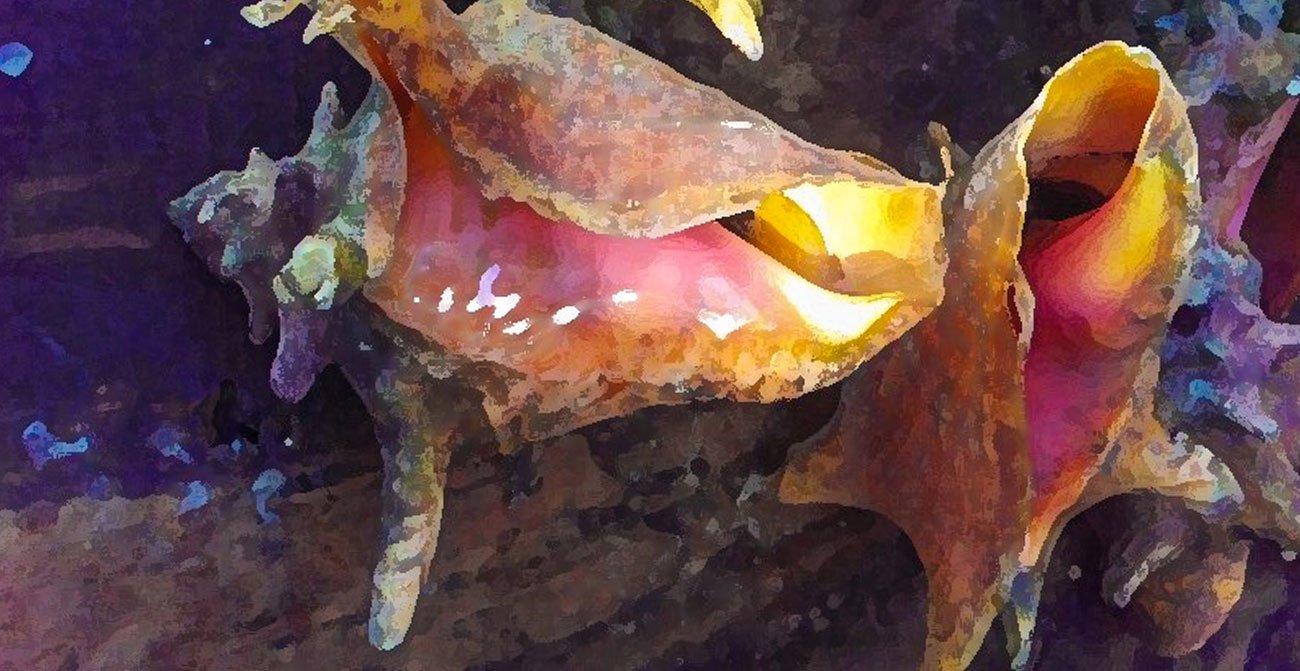 Royalty of the Sea- The Queen Conch

Updates F&ARP
The queen conch is a large, herbivorous marine gastropod or snail, which can be found throughout the waters of the wider Caribbean region and Florida. This particular species of conch is differentiated by its large, whorl-shaped shell, spiny shell apex and bright pink interior at the shell’s lip. Deemed by far the region’s most important snail, the queen conch has served as a main food source for the inhabitants of Caribbean coasts and islands since the settlement of the first Amerindians. In recent times, it remains an important protein source in the region, with growing exports to the United States. Apart from acting as a source of food, the brightly coloured shell is used as a horn instrument, sold for ornamental use and was once utilised in the manufacture of lime and porcelain. This fascinating creature is also capable of producing conch pearls, which (although they often have high market value) are of limited demand since they fade with age. Depletion of the resource/ Status of the resource From the 1960’s to present, Caribbean countries have seen increased demand for this particular marine snail, with growing populations and tourism sector. Unfortunately, the available stocks of queen conch are insufficient to meet today’s demand. Stock depletion is now occurring as queen conchs are heavily fished throughout the Caribbean, southern Florida, and around Bermuda, creating the need for management regulations of the fishery. Trinidad in particular has never been very productive for conch fishing due to low salinities and high turbidity in shallow-water areas influenced by the runoff from continental rivers like the Orinoco. In the past, conchs were fairly abundant in Bombshell, Chacachacare, and Scotland Bays until they were fished out several years ago. Tobago has traditionally produced enough conchs to supply local needs, but increased demand both there and in Trinidad has led to severe overfishing. Fishing effort in Tobago is now very sporadic; mainly occasional collection of some deeper water conchs for sale to local hotels or for consumption by Tobago residents. In 1985, the queen conch was listed in Appendix II of Convention on International Trade in Endangered Species of Fauna and Flora (CITES) Convention as “a species for which the trade required strict control and management, in order to avoid the potential of extinction”. Further to this, in 1990, the species was also listed in Annex II of the Cartagena Convention’s Protocol Concerning Specially Protected Areas and Wildlife (SPAW Protocol) as “a species that may be used on a rational and sustainable basis and that requires protective measures”. As such, CITES has implemented regulations on the fishery, however, despite these management efforts, recovery of this economically vital species has been slow. God Save the Queen! Throughout the Caribbean, management efforts such as restrictions on the use of SCUBA gear and hookah gear, minimum size limit, seasonal and spatial closures, cap on a harvest and the introduction of export quotas have been applied to the queen conch fisheries in several countries in order to limit conch fishing. Further conservation efforts such as the introduction of no take zones and marine reserves have also been suggested to benefit deep water conch stocks. Locally, Trinidad and Tobago are yet to enact CITES legislation, despite having acceded to the CITES Convention since 1984. Further to this, in 2003, Trinidad and Tobago acceded to the SPAW Protocol, under the Cartagena Convention, and is therefore required to implement protection efforts for the valuable queen conch species. Yet, with little to no information or records on the local conch fishery, the nation has remained unable to fulfil duties in management and conservation of the queen conch. Currently there is no management plan in place or regulations governing conch harvesting and sale in Trinidad and Tobago. Sustainable fisheries management of the queen conch would require an ecosystem based approach incorporating protection of nearshore habitats, juveniles and spawning adults, establishment of marine reserves in juvenile and adult habitats, and routine monitoring of the fishery’s activity in terms of spatial distribution as well as population status and distribution. Challenges to the queen conch fishery include the complexity of the species’ biology, the continued illegal trade, lack of catch and effort data, poor surveillance and enforcement efforts and unsustainable fishing practices. In addressing these issues, implementation of a bottom-up approach that incorporates all stakeholders in development of management strategies may prove the most effective method. A more participative approach to managing the queen conch fisheries can be achieved through fisheries co-management, however the present state of the Caribbean fisheries is such that many strides must be made in public awareness and education on environmental management and conservation of significant marine resources like the queen conch.   By: Ms. Tyann Henry Maine Technician Institute of Marine Affairs Photo Credit Queen conch being sold at Swallow’s Bay, Tobago Taken by T. Henry
Share
share

Deployment of the Water Quality Monitoring Buoy in Claxton Bay, Gulf of Paria