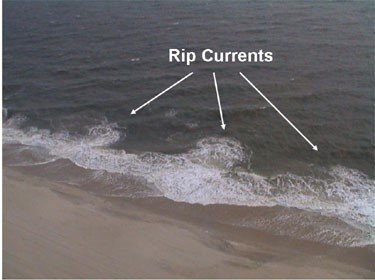 The holidays are here again, and the beaches will beckon many a holiday-maker to its shores.  But as you venture close, remember to exercise caution and practice safe bathing habits as a relaxing and fun trip to the beach can turn sour with just one rogue sea current.

Bathers need to be aware of rip currents. Rip currents are powerful, channelled currents of water flowing away from shore which can easily pull unwary bathers quickly out to sea. They typically extend from the shoreline, through the surf zone (the area of breaking waves bounded by the point of first breakers, then landward to the maximum uprush of waves on the beach), and past the line of breaking waves.

Rip currents generally occur where the waves break. They are common within pocket beaches with moderate to high wave energy such as along the north coast of Trinidad example, Maracas and Las Cuevas Bays, and at unsheltered beaches on the east coast such as Mayaro Bay. Most beaches in Tobago, with the exception of those protected by coral reefs experience rip currents.  These dangerous currents are deceptive, and contribute to drownings all year-round including festive times of the year, when more people go the beaches.

Rip currents form as waves dissipate along the beach causing water to become trapped between the beach and a sandbar (sand from the shore which washes away and accumulates under the sea surface offshore) or other underwater feature. When waves break over the sandbar in quick succession, water builds up rapidly and is blocked from returning seaward. The water is trapped between the sandbar and the shore until it is high enough to create a current which flows seaward, creating a channel through the sandbar. This is called a rip current.

How do you identify and avoid rip currents?

It is important that you observe the prevailing water conditions when visiting the beach. The best way to avoid natural hazards like rip currents is to be observant, obey the lifeguard and keep away from the red flag areas. Always remember, if lifeguards can’t see you, they can’t save you. However, if you visit a beach that does not have an attending lifeguard, these are visible signs from the shore that will make it easy to identify the existence of rip currents (Figure 1):

Additionally, a bathing area with potholes, moving sand and a strong movement of water seaward indicate the presence of a rip current.

What to do if caught in a rip current?

Remain Calm! Panicking will cause you to unnecessarily exert yourself and become exhausted thereby increasing your risk of drowning. You should swim parallel to the shore until you are out of the current, then turn and calmly swim to shore (Figure 2). Do not swim against the rip current – this is dangerous (Red in diagram). If someone is caught in the current, floatable items such as cooler covers and boogie boards can be thrown to the person to lend assistance.

The safer months for sea bathing in Trinidad and Tobago are generally between May to October. During this period, except for an occasional storm, the water tends to be calmer. From November to April the sea tends to be rougher.  Bathers should exercise increased vigilance when swimming during these months.

On beaches where there are lifeguards bathers should note the red warning flags designating danger areas. Red/yellow flags indicate safe areas for bathing. Ask the lifeguards on duty if you are not sure what the flags mean. Never bathe alone.

Local residents usually know of rip currents and other hazards – ask them. It is dangerous to swim or bathe close to fishing boats and places where fishermen can land their catch because there may be engine blocks, sharp fish bones and anchors scattered on the sea floor.

Above all, be observant and mindful of your surroundings at all times.

Institute of Marine Affairs, 2004. “A Guide to the Beaches and Bays of Trinidad and Tobago” National Oceanic and Atmospheric Association, Rip Current website: http://www.ripcurrents.noaa.gov/