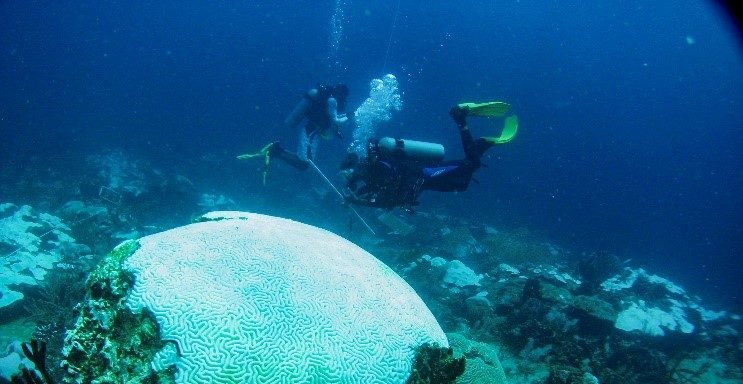 National Oceanic and Atmospheric Administration (NOAA) Coral Reef Watch have released the latest coral bleaching outlook for the next four months (August to November) for the Caribbean region. (https://coralreefwatch.noaa.gov/vs/gauges/trinidad_tobago.php). According to this, Trinidad and Tobago’s, coral bleaching stress gauge is currently at “Watch Level.” This means that the waters around Tobago are above average sea surface temperature (SST) for this time of year. NOAA predicts that over the next 5 – 8 weeks, Tobago and the rest of the Lesser Antilles have a 60 % chance of reaching “Bleaching Alert Level One,” (high likelihood of coral bleaching), while the outlook for next 9 – 12 weeks indicates a 60 % chance of reaching “Bleaching Alert Level Two,” (widespread coral bleaching and coral mortality).

What is Coral Bleaching?

Corals are capable of building massive underwater structures because they form a special relationship with the symbiotic algae that live inside their tissue. The algae photosynthesises using sunlight to produce enough energy to supply both themselves and their coral host. In return, the coral provides the algae with a safe haven, stores essential nutrients and removes the algae’s waste.

When corals become stressed, such as when water temperatures are too warm or too cold, the coral-algae relationship breaks down and the algae is expelled from the coral. This loss causes the coral to turn white, and is therefore referred to as coral bleaching. The loss of the algae means that the corals lose their major source of food; and if unfavourable conditions persist, the coral will starve and eventually die. In the last 40 years, coral reefs around the world have suffered from global and regional coral bleaching events, where large sections of reef turned white as summertime sea temperatures became too warm because of global warming. Coral reefs of Tobago have also suffered from multiple bleaching events in the past including 2005 and 2010, and these have significantly degraded reef health.

Coral bleaching in Speyside, Tobago in 2010. Photo by Jonathan Gomez

What to look for?

Caribbean corals are typically shades of brown and green, but once bleaching begins, the corals appear pale and eventually fade to bone white; at this point, the corals have lost most of their algal pigments. Bleached corals cannot survive for extended periods without their algal symbiont and in many cases they die. Once corals die, macroalgae and turf algae (different from the symbiotic algae) are the first things to grow over the coral skeletons and the reefs begin to take on a furry appearance. Even if corals do not die immediately, they become more vulnerable to infections and diseases. Coral diseases tend to spike after stress events. Look out for corals with a black band or patches of white around the coral tissue and partial tissue loss and death.

Over the next three months, it is important for citizens who utilise the waters around Tobago to keep an eye out for changes to our reefs. Please report any observations of coral bleaching to local environmental authorities – The Institute of Marine Affairs, The Department of Marine Affairs and Fisheries, THA, and even NGOs in your area – Environmental Research Institute Charlotteville, Buccoo Reef Trust and Environment Tobago to let them know what you have observed. It will be great if pictures and notes such as the location, depth and extent of bleaching observed can be provided.

Not all coral species are equally susceptible to bleaching but the extent of coral bleaching depends on the current state of reef health and the severity of the bleaching conditions (how long sea temperature remain too warm for corals). Following a bleaching event, the recovery of coral reefs depends on the species of the coral but also on how healthy the reef is. Therefore, curbing local stressors, such as fishing, pollution and exposure to sedimentation, are highly recommended following a bleaching event to allow the reefs to have suitable condition for corals to recolonise and grow.