IMA > News  > Sargassum – A Visitor to Our Beaches 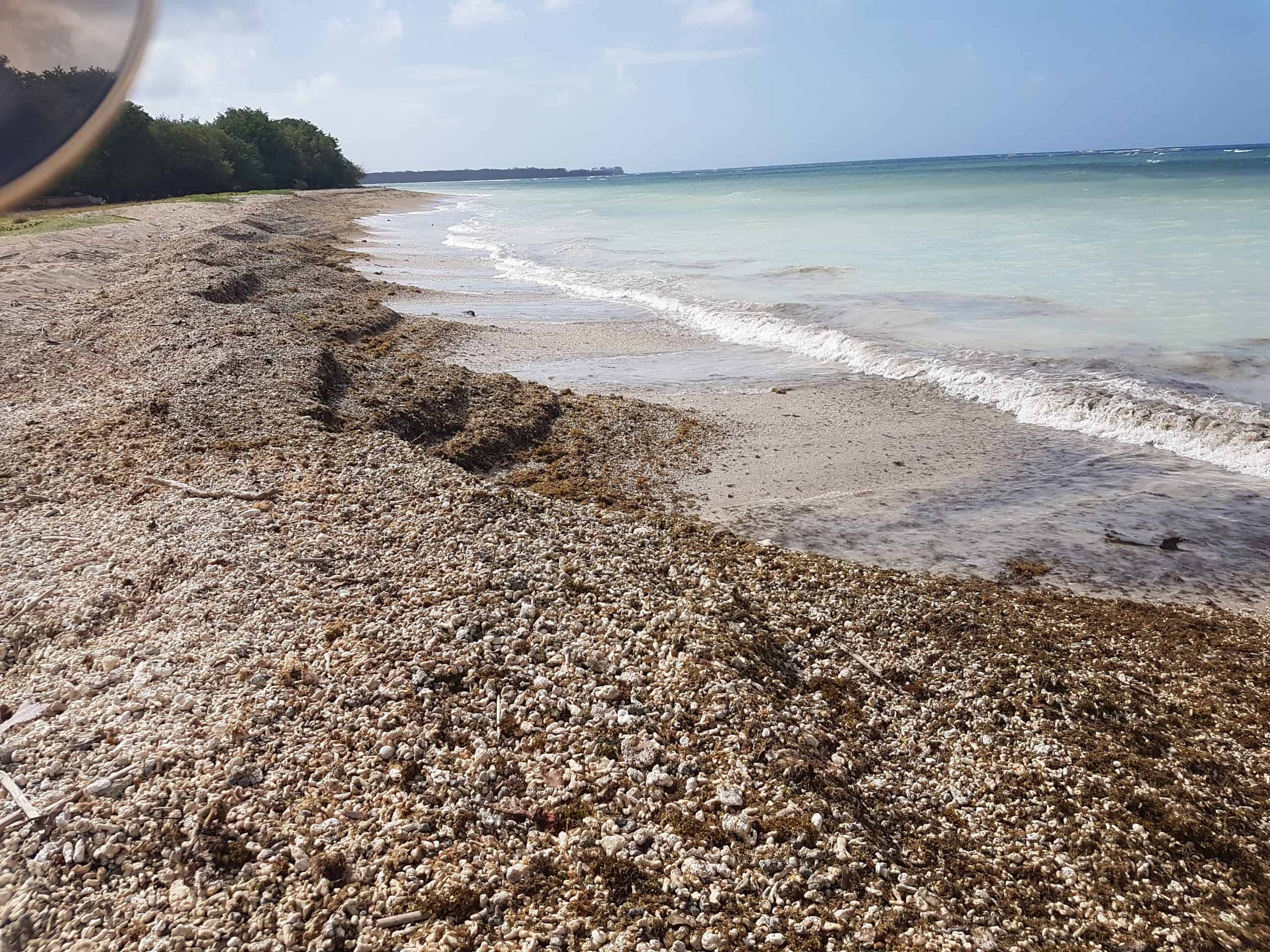 Usually, locals make plans for recreational activities at our beaches over the Easter long-weekend. This year is very different.  The novel coronavirus pandemic has resulted in a nationwide stay at home order across our twin island Republic. While we are home, another visitor is washing up on our beaches, the Sargassum seaweed. Large quantities of Sargassum have become an annual visitor since 2011, with massive piles recorded in 2011, 2015 and 2018.

Pelagic Sargassum is a brown alga or seaweed that forms large floating mats often referred to as “golden tides”.  Field surveys and satellite maps have indicated that Sargassum blossoms naturally in the warm waters of the Atlantic Ocean; the Tropical South Atlantic and in the North Atlantic including the Sargasso Sea.  Since 2011, there have been several episodes of unusual quantities of two species of Sargassum, S. natans and S. fluitans, reaching the coasts of many of the islands of the Caribbean Sea including Trinidad and Tobago.

Where is it coming from?

In 2013 satellite images, Sargassum was seen concentrated in the tropical North Atlantic over 600 km offshore from South America, to the north and west of the mouth of the Amazon River. For about 18 months prior to landing in 2013, back traces from the Sargassum sighting location were made using a high-resolution numerical ocean current model which pointed to waters near the North Equatorial Recirculation Region (NERR) (Johnson et al. 2013). Sargassum may be aggregating in the NERR region and blooming there. More recent satellite images revealed increasing trends in Sargassum amounts in both the tropical Atlantic and the Caribbean through 2018. The currents that have resulted in the movement of more Sargassum into the Eastern Caribbean and Northwest African coastlines are not clear at this time (UNEP, 2018).

According to the UNEP 2018 White Paper on Sargassum, there is no evidence that river discharge and nutrients from rivers has stimulated new growth of Sargassum. The tropical Atlantic has for ages received rich nutrient inputs from some of the largest rivers in the world, including the Amazon River, Orinoco River, and the Congo River. There is also upwelling – which provides colder, nutrient rich water from the deep to the surface, in the equatorial regions of the Atlantic, and along tropical Africa and South America. The tropical Atlantic also receives dust from the Sahel in Northwest Africa which is rich in iron. While these nutrients may enhance the growth of Sargassum, these inputs have not likely varied enough to be the primary cause for the Sargassum impacts on the greater Caribbean region in recent years.

Further research is required to understand the possible causes for the proliferation of massive amounts of Sargassum in recent times, but the following (still untested) hypotheses have been advanced:

The following causes are the subject of substantial speculation, but whether they play a role is unclear and perhaps even unlikely:

While we still do not know with certainty why so much Sargassum is coming to our shores, its impacts on our shoreline have been felt.  Massive Sargassum deposits on beaches have negatively impacted the socioeconomic aspects of local livelihoods (tourism, fishery industries- ports) of coastal communities. According to the UNEP 2018 White Paper, some areas of the Caribbean have witnessed large declines in tourism, such as a 35% drop in arrivals in 2018 in Mexico. Sargassum blooms resulted in reduced access to fishing grounds and disrupted fishing operations. In Tobago mats of up to 0.6m thick engulfed the beaches with the most notable incident occurring in July 2015. Labelled a natural disaster by the Tobago House of Assembly, over TTD 3 million was spent on clean-up efforts.

The ecological impacts of the invasive seaweeds on our coasts is still being assessed, but the assumption is that massive influx of Sargassum seaweed has resulted in potential disturbance of marine life (dead fish and sea turtles have been found when Sargassum washes onto the shore in massive quantities, showing the potential correlation), beach fouling, and coastal dead zones. The accumulation and decay of large amounts of Sargassum in the water can result in anoxia and the release of poisonous hydrogen sulphide, potentially causing the death of marine life. Entanglement of foraging turtles in the Sargassum rafts, and blockage of turtle nesting sites by the seaweed that reaches the beach also represents a threat to turtle populations, with Trinidad and Tobago being one of the largest Leatherback turtle nesting site in the Atlantic.

To better cope with the complexity of the massive Sargassum landings, a multi-stakeholder strategy using an integrated approach is required. In 2015, the Institute of Marine Affairs (IMA) in conjunction with the Global Environmental Facility Small Grant Programme (GEF/SGP) held multi-stakeholder consultations. These consultations resulted in the development of a National Sargassum Response Plan that outlines a suite of potential management actions and synchronised approach to addressing the massive Sargassum incursion. The objectives and components of the draft Response Plan included the development and implementation of an early warning system, communication strategy as well as coordinated clean-up efforts and emergency response teams, research and monitoring. This plan is currently being updated by the Inter-Ministerial Integrated Coastal Zone Committee using the latest scientific findings and recommendations.

Some actions have already been implemented consistent with the draft Response Plan such as the establishment of a local Sargassum network. Once information, including satellite imagery, is shared on the Regional Sargassum network through Specially Protected Areas and Wildlife – Regional Activity Centre- United Nations Environment Programme- Caribbean Environmental Programme  SPAW/RAC UNEP-CEP Project Sargassum, the information is disseminated through the local network to initiate necessary action. Research is also being conducted by the University of Trinidad and Tobago and the University of The West Indies to determine commercial uses of the seaweed such as conversion into manure, fertilisers, fungicides and fish food.

The Tobago House of Assembly through the Tobago Emergency Management Authority (TEMA) and Department of Environment have developed their response plan, and have identified sites for storage/disposal in the east, central and southwest Tobago with appropriate designated perimeters to minimise impacts on terrestrial plant life and to minimise the impacts of odours. The Sangre Grande Regional Cooperation which technical assistance from the IMA has also identified potential storage/disposal sites within the Cooperation. The IMA has also prepared and disseminated public education and awareness material on Sargassum.

So this year while we sit at home, our coastlines are still being inundated with Sargassum. National and local government are directing funding and resources to prevent a potential public health crisis arising from the covid-19 pandemic. The Sargassum is acting as a deterrent to any potential beach-goers, thereby inadvertently supporting the governments ‘stay at home’ measures. Meanwhile, our turtle nesting season has started and will run from March-August. It appears that for now, the turtles will have to overcome Sargassum-clogged beaches largely out of the view of the public eye.