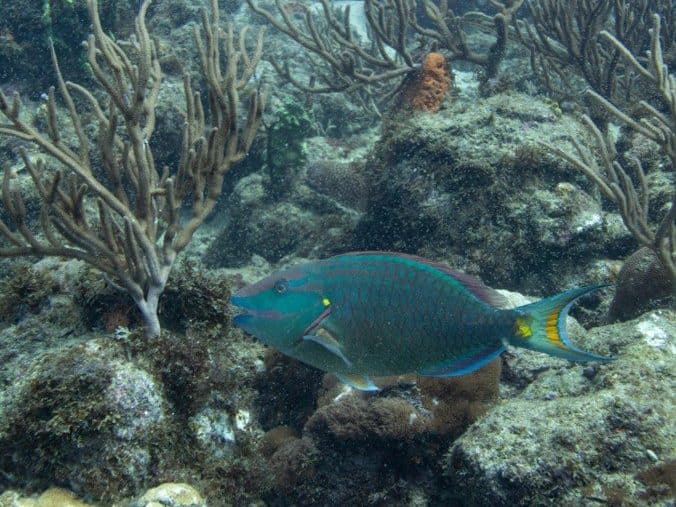 Parrotfish – Eating and “pooping” their way to healthy reefs!

Present on Tobago’s coral reefs and adored by snorkelers and divers because of their often garish coloration, are at least 10 species of parrotfishes (Family: Scaridae). Within recent times much attention has been placed on these enigmatic creatures. The focus, however, is not their fickle coloration during each life-stage, or their sex changing ability, or even their self-extruded protective mucous “sleeping bag”.  Rather, much of the focus has been on their important role as a sand producing machine and in maintaining coral reef health.

Parrotfish feed mainly on algae extracted from pieces of coral bitten off from the reef using their teeth which have been fused into powerful beaks, much like a parrots’ beak – hence their name. As much as 90% of their day may be spent nibbling away at the reef. The rock and coral skeleton ingested is ground up through their teeth and by molar-like teeth in their throats. The indigestible material is then defecated “pooped” out as smooth white sand. Yes, sand!  A large parrotfish can poop up to 200 pounds of sand in a year and as much as 85% of the sand produced on a beach can be pooped out by these fishes (Perry et al., 2015). If your beach is near a healthy population of coral-eating parrotfish, you just might be digging your toes into some parrotfish poop on your next visit!

Parrotfish though, perform a far more important function in their grazing – they are the reef’s gracious and indispensable gardeners, removing the algae that compete with corals. This prevents the corals from being overgrown and becoming smothered. The transformation of many Caribbean reefs to algal dominated habitats in recent decades have been linked to the loss of herbivorous fish like the parrotfish, due to pollution and overfishing. According to the report “Status and Trends of Caribbean Coral Reefs: 1970 – 2012” (Jackson et al., 2014), there has been more than a 50% loss in living coral cover throughout the Caribbean since the 1970s. What is surprising though, is that the loss of grazers such as sea urchins and parrotfish was found to have played a much bigger role in this loss, than climate change. Results of a subsequent study which analyzed fossilized parrotfish teeth and sea urchin spines from sediment cores also showed that there is indeed a strong correlation between parrotfish abundance and coral reef growth historically – coral reefs grew faster and healthier when parrotfishes were abundant (Cramer et al., 2017).

With climate change being the biggest threat to coral reefs now and in the future, the critical role of parrotfish in maintaining coral-dominated reefs is even more important. While we are somewhat limited in what we can do at the local level regarding climate change, coral reef scientists believe that we can build coral reef resilience through resilience-based management strategies. By resilience we mean “the capacity of a system to absorb or withstand stressors such that the system maintains its structure and functions in the face of disturbance and change” (Holling, 1973). Macroalgal and algal turf control by grazing parrotfish facilitates the recruitment, growth, and fertility of corals which is a key mechanism promoting reef resilience following a disturbance (Mumby and Steneck, 2008).

For all these reasons combined, several regional and international organizations such as the International Coral Reef Initiative (ICRI), the Global Coral Reef Monitoring Network (GCRMN) and the Caribbean Community Climate Change Center (5Cs) are in support of banning or regulating parrotfish harvesting. Indeed, a number of Caribbean countries including Barbuda, Bermuda, Belize, Bonaire, Turks and Caicos and St Vincent and the Grenadines have already taken that step.

For some countries however, this is not an easy decision. In Jamaica, such a ban was rejected in 2018 by the relevant fisheries authorities due to potential negative socio-economic impacts on small-scale fishers. These small-scale fishers are very dependent on the parrotfish fishery due to the collapse of the grouper and snapper fisheries. Instead, Jamaica has opted to employ another resilience-based management strategy – the designation of a network of fish sanctuaries or Special Fisheries Conservation Areas, to protect and replenish fish populations.

What about Trinidad and Tobago? Well, parrotfish harvesting locally occurs mainly in Tobago where parrotfish is harvested mainly by spear-fishers either SCUBA diving or free diving. They may also be caught by baited fishpots. Spearfishing in Tobago is unregulated – there is no permitting system, gear restrictions, size or catch limits, or open or close seasons.  Overall, the level of exploitation and the dynamics of the fishery is unknown. Additionally, there is some anecdotal evidence to suggest that there may be cause for concern as many fishermen report a decrease in the abundance and size of parrotfish harvested now compared to the past.

Should we take action? The paucity of information on parrotfish harvesting should not be a deterrent for action. Coral reefs are just too important! “Caribbean reefs generate more than US$3 billion annually from tourism and fisheries”.  In Tobago, in 2016, Tobago’s reef associated tourism and recreation contributed over US$852 million to its GDP with approximately 60, 000 jobs being directly supported by coral reefs. This is expected to increase in the next years 10 years to over US$1 billion.

What can we do? Parrotfish management does not mean a complete ban on harvesting as there are less stringent measures that could be applied for precautionary reasons. Regarding T&T, some of these measures include:

Marine Protected Areas (MPAs) or Networks – The establishment of MPAs which are clearly defined managed areas provide many benefits including an increase in the diversity, density, biomass, body size and reproductive potential of many species within their boundaries. This strategy which can protect parrotfish populations also have additional benefits for the reefs as other local stressors such as pollution and sedimentation are usually also managed. Presently, T&T has just one MPA – The Buccoo Reef Marine Park, which was designated in 1973. Under a soon to be completed national project, IFPAMTT (Improving Forest Protected Area Management in T&T), another has been proposed – The Northeast Tobago Marine Protected Area (NETMPA).  These two MPAs are a  great place to start.

Size Limits – Minimum and maximum catch size limits would allow younger fish to grow and become sexually mature (increase spawning biomass), and older fish to produce offspring to replenish stocks. In some places a 30 – 50 cm harvest length have been implemented with success. This strategy would require significant levels of enforcement but could be very effective in its impact.

Reef Stewardship – As a consumer, we can play a key role in securing the future of marine ecosystems like coral reefs by making more environmentally responsible choices when purchasing seafood.  At the landing site, at the supermarket and at the restaurants, opt for more sustainable choices  – fish that are not ecologically important to the reef, and those whose status has been assessed and is being managed accordingly. In Tobago, a good alternative would be the flyingfish, and the invasive lionfish. Snapper, and pelagics such as kingfish and mahi mahi are also better choices.

Overall, management strategies employed should be done in consultation with all stakeholders involved. Management measures must be enforced and coupled with monitoring and surveillance to assess its effectiveness. Of equal importance is public education and awareness, especially for fishers and seafood consumers.

Let us learn from our Caribbean neighbors and be proactive rather than reactive in protecting these important reef inhabitants. Some of the healthiest Caribbean coral reefs are those in areas where governments have regulated parrotfish harvesting, such as in Bermuda and Bonaire.  With their bright colors, mucus sleeping bags, toothed beaks, sand poop and undersea green thumb, parrotfishes are certainly stars of the reef realm.

Next time you dive, listen carefully, you may hear them taking a bite off the reef!

Our Solutions Lie in Nature