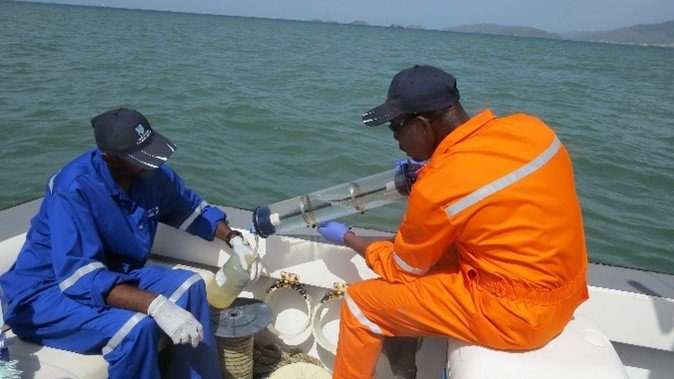 This is the second of a seven-part series on the United Nations Decade of Ocean Science for Sustainable Development.

This decade, 2021- 2030, has been declared, ‘the Decade of Ocean Science for Sustainable Development’ by the United Nations. The Decade seeks to deliver ‘the science we need’ in order to transform ‘the ocean we have’ to ‘the ocean we want’. Part I of this series provided the rationale for the Decade, and the significance of this initiative for Trinidad and Tobago. It also highlighted the societal outcomes considered characteristic of the ‘ocean we want’ at the end of the Decade, and the research currently being conducted for some of the outcomes. Part II of this series focuses on Outcome 1, ‘A clean ocean whereby sources of pollution are identified, quantified and reduced, and pollutants removed from the ocean’.

Why do we need a clean ocean?

The ocean performs numerous services, and if this is to continue, we need to ensure that it remains clean and free from pollution. The ocean is the largest ecosystem on the planet, containing over 97% of the Earth’s water and covering 71% of its surface. It regulates our climate by redistributing and absorbing heat, and produces more than half of the world’s oxygen. It is also an important carbon sink- the ocean absorbs approximately one quarter of carbon dioxide emissions from industry and fossil fuels. This is significant as carbon dioxide is a greenhouse gas that contributes to global warming. In addition, the ocean plays a major role in supporting life and is a habitat for countless species.

Small Island Developing States, such as Trinidad and Tobago, have significant ocean resources compared to their land mass. These resources contribute to the blue economy through industries such as capture fisheries, offshore oil and gas, coastal and marine tourism, marine transportation/ shipping and ports. Emerging industries include mariculture (marine aquaculture) and renewable energy, among others. Various mineral and energy resources are derived from the ocean as well. One example that we do not often hear about is polymetallic nodules, which are found at the surface of soft deep sea sediments. These nodules consist almost completely of usable minerals compared with land-mined ores, which often yield less than one percent. Several medicinal products come from ocean ecosystems, and it is thought that the ocean could be a source of new medicines due to its rich biodiversity and many undiscovered species. Last but not least, many of us use the ocean for cultural purposes or recreational activities such as swimming, surfing and diving.

The ‘ocean we have’

Despite the obvious benefits derived from the ocean, and improved efforts in management and conservation, pollution by physical and chemical wastes from human activities continues to be a challenge. According to the United Nations First World Ocean Assessment published in 2016, much of the ocean has been degraded. Unfortunately, the outlook is not much better. Impacts on the ocean are expected to increase as the world population increases to an estimated nine billion people, by the year 2050. Among the more challenging pollutants to address are:

The vision for this Decade is, ‘the science we need for the ocean we want’. In order to transform the ‘ocean we have’ to the ‘ocean we want’ using ocean science, ten Ocean Decade Challenges, representing the most urgent priorities for the Decade, have been identified. Each challenge contributes to one or more Decade Outcomes. The challenge that is most directly relevant to achieving Outcome 1, a clean ocean, is, ‘Understand and map land and sea-based sources of pollutants and contaminants and their potential impacts on human health and ecosystems, and develop solutions to remove or mitigate them’.  Associated with all challenges are three overarching Decade Objectives: (1) Identify required knowledge for sustainable development (2) Generate comprehensive knowledge and understanding of the ocean and (3) Increase the use of ocean knowledge. Decade Actions- tangible initiatives such as projects and activities- will be conducted over the decade in order to achieve the Decade Outcomes.

The Roadmap for the Ocean Decade outlines several priority research and development areas, which will contribute to achieving the desired outcomes. Priority Area 1 involves the development of a comprehensive map (digital atlas) of the ocean, which will include not only depth measurements, but parameters of the biological, physical, chemical and geological environments, as well as ecosystems, cultural objects, resources and boundaries. This will assist in addressing the challenge above, and achieving Outcome 1. It is expected that research will assess risks of current and future types of ocean pollution, as well as generate ideas to reduce ocean pressures through the promotion of recycling, improved waste management, and strengthening governance regimes that encourage more sustainable production and consumption.

Outcome 1  is also supported by the several of the Sustainable Development Goals (SDGs) included in the United Nations 2030 Agenda for Sustainable Development. The 2030 Agenda was adopted by all Member States (193 countries), and is a commitment to eradicate poverty and achieve sustainable development worldwide by 2030, while ensuring that no one is left behind. The SDGs most relevant to Outcome 1 are SDG 14 (Life below Water), SDG 3 (Good Health and Well-being), SDG 6 (Clean Water and Sanitation), SDG 15 (Life on Land), SDG 11 (Sustainable Cities and Communities) and SDG 12 (Responsible Consumption and Production).

This Decade of Ocean Science aligns well with the Institute of Marine Affairs’ mission to conduct and foster research, and to provide advice for the sustainable management of the coastal and marine areas and resources of Trinidad and Tobago. The Institute has been working over the years to identify and quantify various pollutants in the environment, and to make this information available to other stakeholders who can facilitate the reduction and removal of pollutants from the ocean, all of which contribute to achieving Outcome 1.

What does all of this mean for us?

One of the main objectives of the Decade of Ocean Science is capacity building for ocean stakeholders, particularly within Small Island Developing States and Least Developed countries, in order to improve the scientific knowledge base. This will allow us to participate more fully in developments in ocean science and technology, and benefit from their application in areas such as climate change response, sustainable economic development, food production and ocean management.

The Decade also provides the framework for us to prioritize the issues most relevant to us, as a region. Harmonized regional governance; improved wastewater treatment; further studies on nutrient and agricultural runoff, and the effects on Sargassum; and expansion of policies on marine litter and microplastics, were identified as key to achieving Outcome 1, a clean ocean, at the Western Tropical Atlantic Regional Virtual Workshop held for our region in April 2020.

Most importantly, the Decade will provide an opportunity for scientists as well as other stakeholders such as policy makers, civil society/ non-governmental organisations, the private sector, donors and the general public to work together to reverse the decline in ocean health, and hence deliver greater benefits for the ocean ecosystem and wider society.

Look out for Part III of this series, which will focus on Outcome 2, ‘A Healthy and Resilient Ocean’, another societal outcome we aim to achieve as part of the ‘ocean we want’ at the end of this decade.