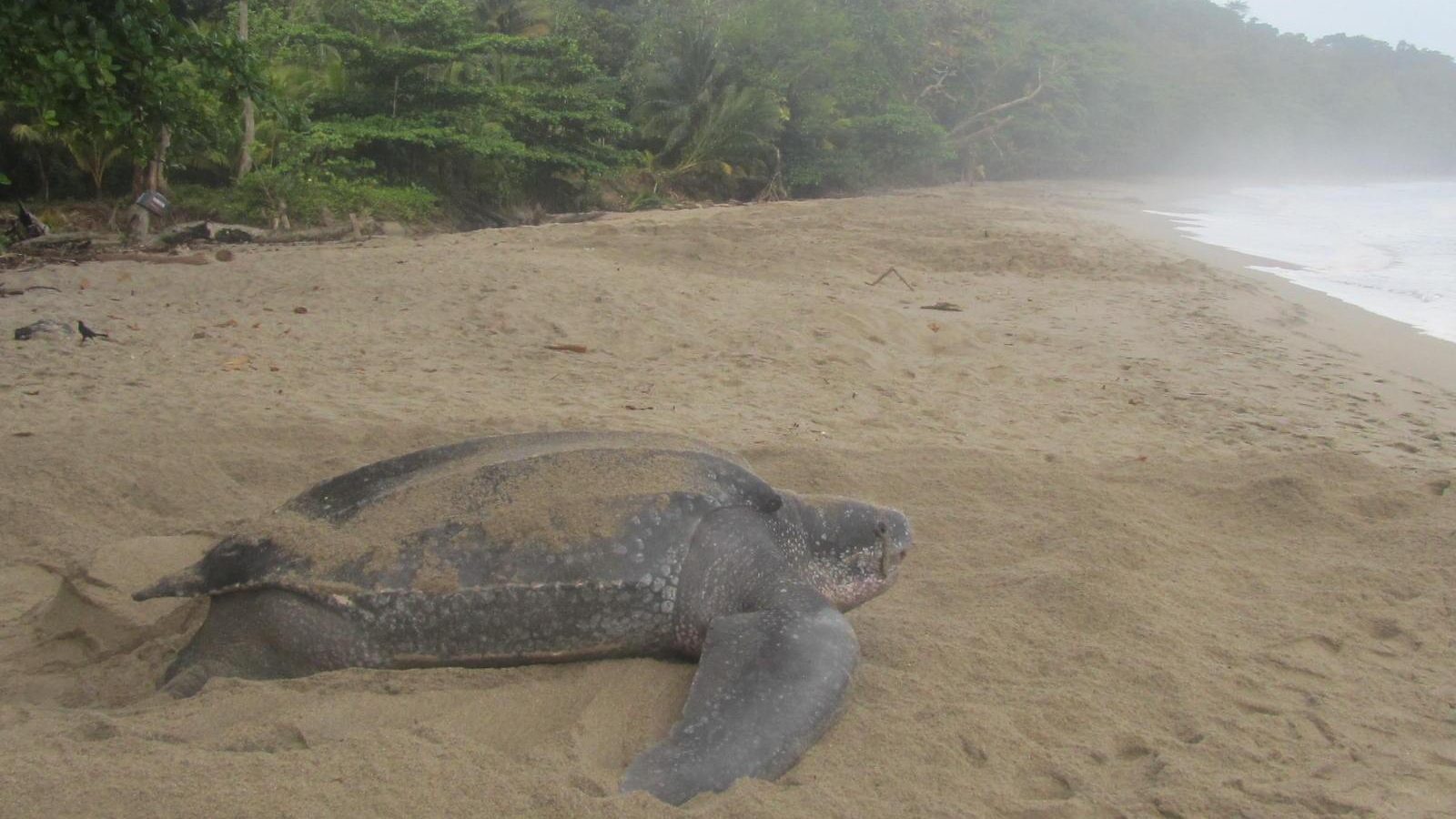 March 2021 marks the start of turtle nesting season in the Atlantic, and Trinidad and Tobago has a 61-year history of protecting the magnificent leatherback turtle (Dermochelys coriacea).  These efforts were started in the 1960’s by the Trinidad and Tobago Field Naturalist Club.  While this history is not well known by many, it is one of our greatest conservation stories, which involved several persons, who worked tirelessly, to protect these great creatures that visit our shores every year to lay their eggs. It is a story about conservation, collaboration and community, that I will try my best to recount during this turtle season, but before I delve into the story, let us be reminded of how amazing the leatherback turtle is and how fortunate we are to have them nest on our shores with some interesting facts as stated by Wider Caribbean Sea Turtle Conservation Network (WIDECAST), National Oceanic and Atmospheric Administration (NOAA) and World Wildlife Fund (WWF) organizations:

The leatherback existed in their current form since the age of the dinosaurs and they are considered to be the largest, fastest and deepest-diving turtle in the world with a shell length (carapace) 4.5 to 5.5 feet, average weight of 1000 pounds, and they are named for their tough primarily black rubbery skin with pinkish white colouring on its underside.

They are highly migratory, some swimming over 10,000 miles a year between nesting and feeding grounds. It is still a mystery to scientists as to how they remember and navigate over such vast distances. Researchers in a 2015 study found that leatherback turtles may use several different cues to orient and navigate through the ocean such as, visible light, beach slope elevation, wave direction and the earth’s magnetic field.

They are accomplished divers with the deepest recorded diver reaching nearly 4,000 feet deeper than most marine mammals.

The average life span of a leatherback turtle is unknown but is thought to be approximately 45 years. They nest, mate and feed on jellyfish and the Portuguese man-o-war throughout the tropic and temperate waters of the Atlantic, Pacific, and Indian Oceans, as well as the Mediterranean Sea. They have the widest distribution of any reptile with a global range travelling as far north as Canada and Norway and as far south as New Zealand and Argentina.

They are the only species of sea turtle that lack scales and a hard shell, and they have small interlocking bones beneath the skin that cover a supportive layer of connective tissue and fat and the deeper skeleton. Their shell (carapace) has seven ridges along its length and tapers to a blunt point.

Their front flippers are proportionally longer than in other sea turtles and their back flippers are paddle-shaped. Both their ridged carapace and their large flippers make the leatherback uniquely equipped for long distance feeding and migrations.

Each female that visits the beach can lay up to 70 to 100 eggs per season, and they can lay eggs multiple times during the season which incubate under sand for 60-75 days.

A 2011 study by Annette Sieg and others found that warmer sands produce mostly female turtles while cooler sands result in mostly males.

A few days after they hatch, the hatchings (baby leatherback turtles emerge together from the nest at night)   quickly crawl to the sea and are dispersed by ocean currents.

Juveniles and young adults feed in the open ocean and are rarely seen. It is believed they live in the warm tropical waters.

The adults feed over vast areas of deep oceanic waters and mate near nesting beaches.

About every 2 years, adult females make extensive migrations to the beaches where they hatched during the months of March to May, nesting mainly on tropical or subtropical beaches.

Once common in every ocean except the Arctic and Antarctic, the leatherback population is rapidly declining in many parts of the world. They face several threats on both nesting beaches and in the marine environment such as:

The greatest threats however to these turtles in Trinidad and Tobago and worldwide are incidental capture in fishing gear (called bycatch), and the hunting of adults for meat and collection of eggs for human consumption. The Pacific leatherback populations are near to extinction because of these threats. The leatherback turtle is considered by the WWF as a vulnerable species. The WWF states that the global population for the species was estimated to be 115,000 adult females in 1982 and presently is now 20-30,000. Their populations in the Pacific and Indian Oceans have dramatically declined by 90% in the past forty years and the Pacific may now have as few as 2,300 adult females. The few remaining important nesting beaches in the Pacific are in Indonesia, Mexico and Costa Rica, with other colonies found in Nicaragua, Panama and Guatemala.

The most important nesting beaches remaining in the Atlantic are: Suriname, French Guiana, Grand Anse Beach in Saint Lucia, Guyana’s Shell Beach, Turtle Beach in Tobago and beaches on the North East Coast of Trinidad.  Trinidad has the 3rd largest population in the world with over 10,000 turtles nesting on the island, which is 80% of the leatherback turtle population in the Caribbean Region. The largest nesting population in the world is found on the African continent in Gabon Mayumba National Park where up to 30,000 turtles descend on the park’s beaches to lay their eggs during the month of April.

The annual nesting season in Trinidad and Tobago starts in March and ends in May and the Grande Riviere Beach has one of the highest density of nests as was discovered by IMA’s retired Researcher, Ms. Lori Lee Lum back in 1990.  During the nesting season, hundreds of turtles visit this beach laying hundreds of eggs, resulting in hundreds of hatchlings digging their way out of their sandy nests and heading towards the ocean.  Sadly many don’t survive.  In fact, one out of every 1000 will make it to adulthood as these hatchlings are vulnerable to larger prey such as birds, stray dogs and sharks.

As the hatchlings make their way to the ocean during the month of August, let us think about all the obstacles they must overcome to survive, and hopefully return to the North East Coast of Trinidad to lay their eggs and start the cycle all over again.

Let us do our part:

Next week, look out for the second part of this turtle conservation story.