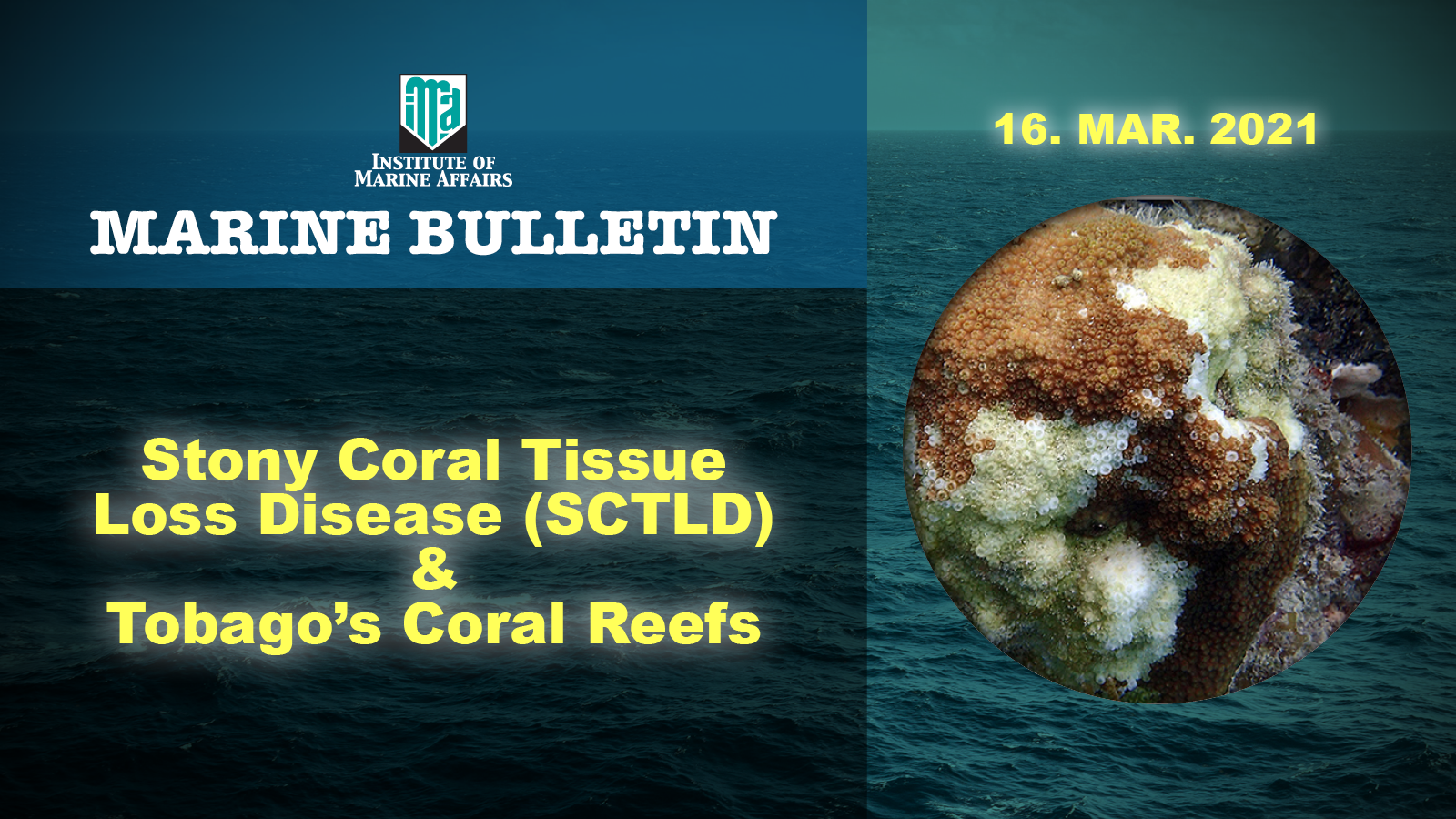 History of the SCTLD Disease

Between 2014 and 2017 along the Florida Reef Tract, the Stony Coral Tissue Loss Disease (SCTLD) spread over a 100 kilometers  of reefs. As the disease spread to other locations, it left in its wake, high coral mortality among some of the most common and crucial species found on Caribbean reefs. Today, the spread is much wider with latest survey reports showing outbreaks of the SCTLD disease throughout the Great Antilles, along the Mesoamerican Barrier reef and with observations of SCTLD as far south as St Lucia. The direction of the spread appears to be facilitated by current flow.

Stony Coral Tissue Loss Disease results in the formation of many lesions on the living surface of the corals that spread rapidly across the colony and eventually join together. The sites of infection may appear bleached at first, but the infected coral polyps will eventually die and result in loss of the dead tissue and the exposure of the coral skeleton beneath. The disease resembles other coral diseases, including white band disease and dark spot disease, and coral bleaching but here are a few key differences. The coral species targeted by the SCTLD are namely the brain, pillar, star and starlet corals, while the branching corals (that are typically impacted by white band disease) appear to be not affected. At an outbreak level, the reef will experience mass infections among the vulnerable species followed by rapid die offs and subsequent spread to neighbouring reefs.

The disease targets coral species that make up a large portion of our coral communities found throughout Tobago. In fact, seven out of our ten most common hard coral species are vulnerable to the SCTLD. This includes the largest brain coral in the western hemisphere, found in Speyside, which is one of the many species of brain coral common to Tobago and vulnerable to SCTLD and also, important reef builders including the boulder star coral which provides major structure at Coral Gardens in Buccoo Reef. Coral Gardens is the most popular site for the glass bottom boat tours in Tobago. A local outbreak will be devastating, especially considering that Tobago’s coral reefs show limited recovery from disturbance events. The silver-lining is that the disease does not seem to affect the branching corals – Acropora cervicornis and Acropora palmata. These branching species are rare on Tobago’s reefs but are doing well wherever they occur.

What to do, if you do see SCTLD?

To date we have not found SCTLD at our ten monitoring sites as of June 2020, but we need your assistance to help us monitor the reefs. A disease outbreak will show a number of infections in an area where notable signs of tissue loss will be obvious, and where the white coral skeleton is exposed giving a bleached effect. On close inspection you should see the coral tissue falling off.  If you come across corals on a reef while diving that resembles the disease, please record it by taking a picture or a video of the infected colonies. When you take a photo of the coral, please take a close up of the infected area, and a zoomed-out photo of the whole coral colony and the surrounding area. Please also record the location and the depth of the infected corals. If you know the species of the coral, this will be helpful, otherwise the following category of coral will be useful to know brain coral, boulder coral, pillar coral and plating coral.

If you dive in an area with suspected Stony Coral Tissue Loss Disease, please DO NOT TOUCH the coral with the disease and avoid getting too close to disturb the coral tissue and the sand around the coral. The disease is water borne and spreads easily through contact. PLEASE disinfect your dive gear before diving in other locations. THIS IS IMPORTANT! Even if there is doubt, please record it and report to the IMA and avoid diving on other sites before disinfecting your dive gear.

How to safeguard our reefs?

While not much can be done to curb the spread of diseases from other parts of the Caribbean because of the natural flow of our currents, we can limit the avenues of spread. We can regulate the disposal and treatment of ship ballast water away from coral reefs, and disinfect dive gear of visitors who may have dived in other Caribbean locations with suspected disease outbreaks.

Compromised coral health is known to make coral species more susceptible to diseases, and more severe cases of coral disease and mortality are associated with coral reefs exposed to higher temperature stress, poor water quality and higher sedimentation. Local long-term efforts to curb the impacts of coral disease and climate change related impacts, which are projected to get worse in the future, are setting up effective reef management systems to support healthy resilient reefs that recover from diseases or external threats. This includes reducing pollution and sedimentation on reefs by regulating coastal zone activities, along with fisheries management.

Despite knowing how easily infectious SCTLD is and the rate of spread and devastation, scientists are still grappling with identifying the pathogen that is causing SCTLD and what has led to the regional outbreak. It is thought to be spread by a bacterium pathogen, which means that the use of antibiotics may be suitable solution for treatment, however small-scaled studies have shown the disease spread to other parts of the coral colony and neighbouring corals, quickly outpaces the time it takes to treat a section of the coral colony. For more information on Stony Coral Tissue Loss Disease and the effort behind treating it, please see the AGRRA dashboard: https://www.agrra.org/coral-disease-outbreak/#sctld-dashboard