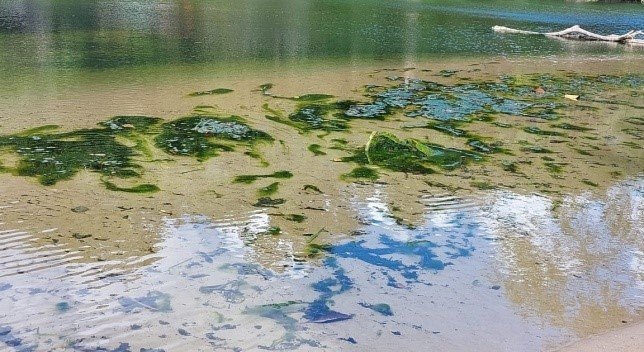 Tropical Marine Ecosystems (TME) represent some of the most diverse ecosystems on earth.  Images of colourful coral reefs, lush seagrass meadows and mangrove forests, and of course the open ocean should appear to mind when thinking of these ecosystems. Taking a closer look at these environments can make for an interesting venture.  Not only will you find a plethora of marine invertebrates and fish, but also present is the sometimes inconspicuous algal community. Algae can be microscopic, invisible to the naked eyes (eg. diatoms) or macroalgae, visible plant-like organisms such as seamoss and sargassum that live in the marine environment. The most recent update of marine macroalgae in Trinidad and Tobago cited a total of 198 species (Duncan and Lee Lum, 2006). Marine algae are different to plants in that algae have no roots, leaves or stems, and there is no tissue differentiation.  Generally, algae are grouped into three major divisions based on pigmentation, (green, red and brown) and play key roles in the development and maintenance of the above mentioned ecosystems. In order to fully appreciate the complexity of TME one also has to examine the contributory efforts of marine macroalgae.

Seagrass meadows represent very complex and diverse ecosystems that function through detritus-based and herbivore (planting feeding) food webs. These ecosystems are profoundly productive, faunally rich and as such are ecologically important. The grass blades offer a suitable substrate for epiphytic algae and micro-algae and the beds are mixed with benthic macro algae all of which are important food sources for marine animals frequenting the meadow. Research into the primary productivity of seagrass meadows has shown that algae on seagrass blades contribute to 20% of the production in these ecosystems.

Mangrove forests are considered one of the most productive coastal ecosystems.  Whilst most of the energy is derived from leaf litter production, a diverse group of macroalgae also contribute tremendously to the primary productivity. These algae grow on prop roots, pneumatophores, stems and on sediment.  Growth is most abundant in regions where there is suitable salinity and maximum light penetration, facilitated by the position of the mangrove trees and canopy gaps. Mangrove tissue decomposition is considered to be a slow process because of their high cellulose, tannin and lignin content. As such, nitrogen within these ecosystems are more readily available in the first instance from macroalgal sources. Primary and secondary consumers including juvenile fish and invertebrates ordinarily rely on the mangrove roots for shelter and more so macroalgae as a food source. It has also been suggested that drift macroalgae facilitate mollusc habitation by improving substrate complexity and by providing an additional food source (Mejia, 2012).

The dynamic between coral reefs and macroalgal growth can be complex. The distribution of marine macroalgae within coral reef communities is dependant largely on the degree of herbivory. Algal varieties in the form of algal turfs, fleshy macroalgae and encrusting coralline algae provide a reliable food source for many reef inhabitants. Sparisomoid parrot fish represent approximately 80% of the herbivorous fish population on Caribbean reefs. Following closely behind is the surgeon fish, unicorn fish and damsel fish. It has been reported that some species of reef fish display species specific feeding habits with respect to their macroalgal food source. Herbivory is important in maintaining macroalgal density and structure, as well as coral reef recovery. Typically reefs that experience a depletion of large herbivores can potentially face a shift from a coral community to a macroalgal community. Apart from the top down control described above, nutrient balance is also a key factor in maintaining the dynamic within the reef (bottom up control). Algal blooms follow sudden increases in nutrient concentrations, typically due to land derived pollution. This often results in a shift in community structure (Littler, 2013). The beginning of this shift is a useful indicator for reef monitoring and restoration activities.

The influence of marine macroalgae on seagrass, mangrove and coral reef communities can sometimes go unnoticed. But a careful examination of the dynamics of these ecosystems can reveal their enormous contributions. Generally, they aid in diversifying food sources and habitats for juvenile fish and crustaceans within marine environments. In well balanced ecosystems, the growth of these organisms are maintained at a level suitable to the needs of the ecosystem. Whilst these coastal and marine environments continue to benefit tremendously from marine macroalgae, research into the uses of these organisms in other facets of life remain ongoing and extremely promising.

Littler, M. M., & Littler, D. S. (2013). The nature of macroalgae and their interactions on reefs. Research and Discoveries: The Revolution of Science Through Scuba.

The Great Conservation Story of the Leatherback Turtle in Trinidad and Tobago: Collaboration, Community and Conservation