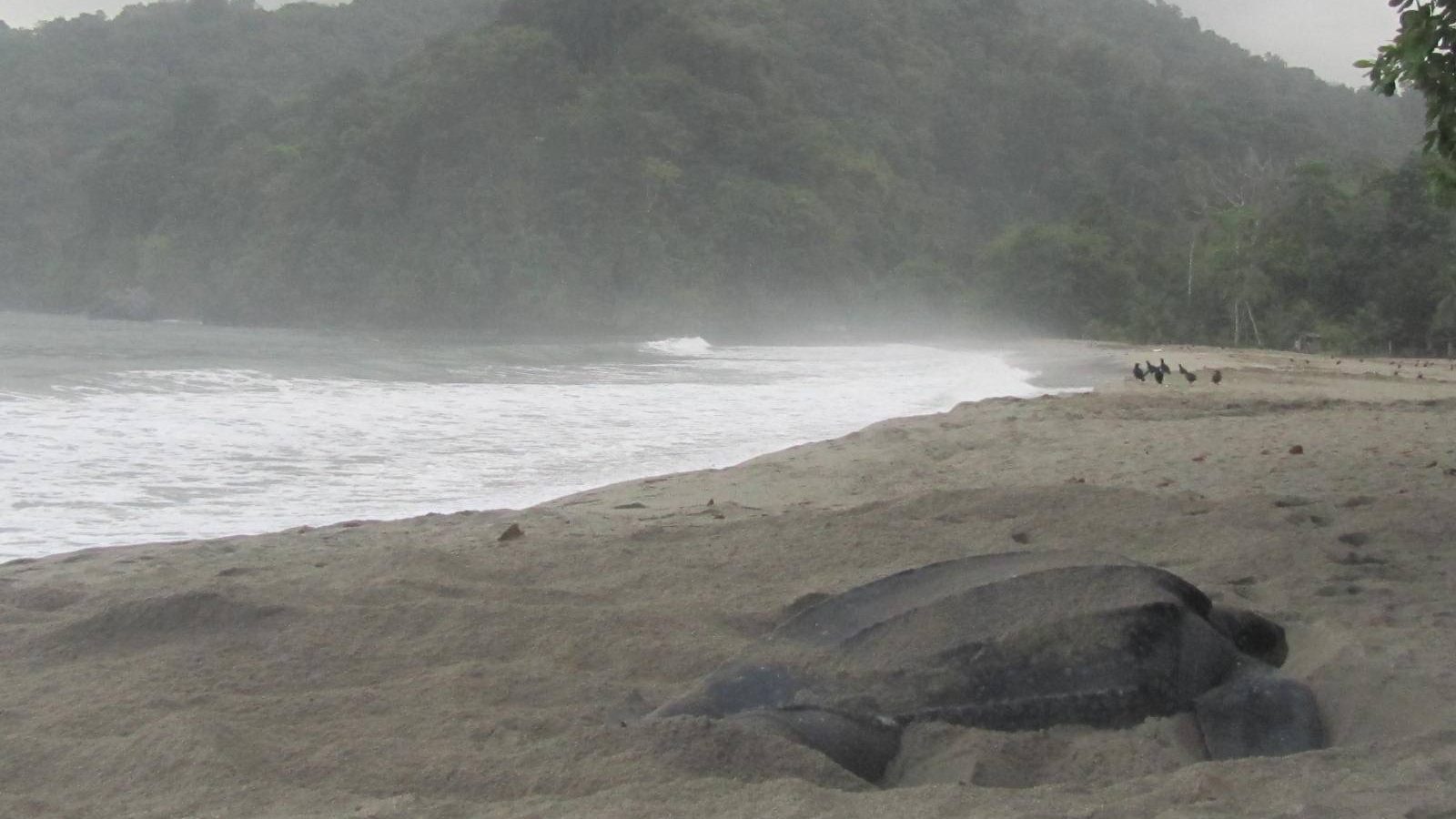 This is the third and final part of a three-part series on the Great Conservation of the Leatherback Turtle in Trinidad and Tobago.

We last learnt how Nature Seekers started in 1990 with the assistance of the Forestry’s Wildlife Section. Since then, Nature Seekers has continued to grow as a Non-governmental organization (NGO) in membership and recognition both here and abroad. Nature Seekers has been recognised for their great work and contribution to protecting the leatherback turtles, and as an excellent example of how education and a love for these charismatic creatures can change people’s perspective on how to wisely use their natural resources. The organisation has garnered thirteen (13) national awards including the Hummingbird Silver Medal for Life Service to Community in 2001 and the Public Service Medal of Merit, Gold in 2005 for environmental conservation internationally.  In 1993, Nature Seekers was inducted into the “Global 500 Roll of Honor” and has also received two awards from the United Kingdom of which one was awarded to Ms. Suzan Lakhan Baptiste, Chairperson of Nature Seekers.  Ms. Lakhan Baptiste also received a CNN Hero Nomination in 2009.

Nature Seekers has had a positive impact on other communities on the north east coast and in Tobago, as they have established their own network to protect the leatherback turtles as well as the four other protected sea turtle species that visit our shores (Green, Loggerhead, Hawksbill and Olive Ridley).   Nature Seekers has assisted these neighbouring communities in collecting turtle data, and trained them in tour guide management. Today, these communities have not only learnt how to protect an important endangered species, but are also how to earn a living, directly from the tours and indirectly from various other businesses, such as guest houses and souvenir shops.  As many as twenty thousand domestic and international tourists visit the north east coast annually to observe the nesting leatherback turtles and aid the hatchlings as they make their way safely to sea.

Supporting this great conservation work, much research was conducted in the early 2000s, by retired IMA Researcher, Mrs. Lori Lee Lum, whose published report entitled, “An Assessment of Incidental Turtle Catch in the Gillnet Fishery in Trinidad and Tobago”, shed light on a new problem for the leatherback turtle population in the Caribbean. Mrs. Lee Lum found that “gillnet fishing was conducted year-round by 71% of the fishermen interviewed. Of the turtle species captured in this fishery, the leatherback turtle, Dermochelys coriacea, was reported as the most common and problematic. Over 3000 adult turtles were estimated to have been caught in the gillnet fishery in 2000. Incidental capture occurred off the north and east coasts of Trinidad during January to August, when these marine reptiles are approaching nesting beaches. Fishermen reported that approximately 73% of leatherback captures on the north coast and 66% on the east coast were released alive during the study period.”

The fishermen themselves were losing thousands of dollars in fishing nets which affected their livelihoods. During this period, Mrs. Lori Lee Lum also investigated the leatherback turtles nesting population at Grande Riviere, which has one of the densest populations of nesting leatherback turtles in the world. Up to one hundred (100) turtles could be found nesting on this beach in any given night. Such was the turtle “traffic jam” that some turtles would even accidentally dig up the nest of another owing to the high nesting activity. Mrs. Lee Lum in 2005 published her work “Beach Dynamics and Net Distribution of the Leatherback Turtles at Grande Riviere Beach” which provided data about the high density of nesting along this narrow dynamic beach.

Collaborative research was also taking place between Dr. Carol James, Mrs. Lori Lee Lum of the IMA, and Dr. Scott Eckert a Researcher from the United States of America  whose research on leatherback turtles in Trinidad dated back to 1998 and was associated with Wider Caribbean Sea Turtle Conservation Network  (WIDECAST). There have been a number of other international researchers from the US and Canada who from time to time collaborated with several of the NGOs and local institutions such as researchers from Fisheries and Oceans Canada and Dr. Ray Carthy, University of Florida and Dr. Kelly R. Stewart from National Oceanic and Atmospheric Administration (NOAA).

During, the turtle nesting season of 2012 Trinidad and Tobago made international news when it was reported that a number of eggs and leatherback hatchings were killed when the Ministry of Works was attempting to re-route the Grande Riviere River in order to address an episodic extreme flooding event of the Grande Riviere River which led to the shifting of the river mouth and resulted in backshore beach erosion which was going to drastically affect hotels, guest houses and several Leatherback turtle nests. The Institute’s Geomatics Unit and Geology Department which have been monitoring this area by conducting beach profiles found, “In January 2013 high energy swell waves naturally in-filled the erosion channel, and the beach recovery continued over the following months.” This showed that the action taken in 2012 wasn’t necessary and the unfortunate incident was avoidable, since, this beach is a very dynamic area and consultation with the experts could have resulted in an alternative solution. IMA’s Geomatics Unit and Geology Department did publish a paper in 2016 “ The influence of fluvial dynamics and North Atlantic swells on the beach habitat of leatherback turtles at Grande Riviere Trinidad” which spoke to dynamic nature of this area.

Unfortunately, even with all the great work that has been done over the past sixty-one (61) years the Leatherback turtle population in Trinidad and Tobago continues to decline based upon the most current data collected by Dr. Scott Eckert. Dr Eckert’s 2013 assessment of Trinidad’s leatherback population found that “Despite strong growth in the population through the 1990s and dramatic progress with laws and policies to protect turtles on their nesting beaches, the population has been in a rapid decline since 2006.”  In 2018, WIDECAST 2nd Regional assessment which looked at ten years of data collected from Matura found that there was a continuing decline of about 6% per year. A major cause identified for this decline in population was the fisheries bycatch mortality caused by drift gillnets and bottom-set gillnets used by fishermen in the North East Fishing Grounds. It is believed that turtle bycatch is one of the most serious threats to sea turtles globally.

Through the efforts of WIDECAST and the National Oceanic and Atmospheric Administration (NOAA) of the USA, to reduce the entanglements of leatherback turtles several promising have been made to the gillnet fishing practices through the development of smaller and shorter nets and specialised line fishing methods and identification of spatial patterns of leatherback bycatch.  More of this can be done and is currently being proposed including the use of solar powered illuminated gillnets nets.  However, what is more important is that an inclusive conservation approach is needed which benefits both people and turtles including the collaborative development and testing of bycatch reducing ideas.

Other issues  compounding this bycatch threat are development along the coasts such as hotels, roads and proposed ports which will threaten the foraging grounds, the natural marine ‘corridor’ and the nesting beaches themselves. The negative impacts from these developments need to be equitably addressed if we are to continue the great leatherback conservation story that started just after we gained our Independence as a nation in 1962.

The leatherback turtles are an important natural resource that we need to protect so that future generations will be able to enjoy.  By protecting the turtles we are also protecting the coastal communities that have come to depend on the ecotourism revenues derived from turtle watching. Their livelihoods and community resilience are dependent on the survival of this great marine reptile.

Beyond the Blue – Season 3 Episode 1