IMA > News  > Another ‘Golden Tide’ on our Shorelines 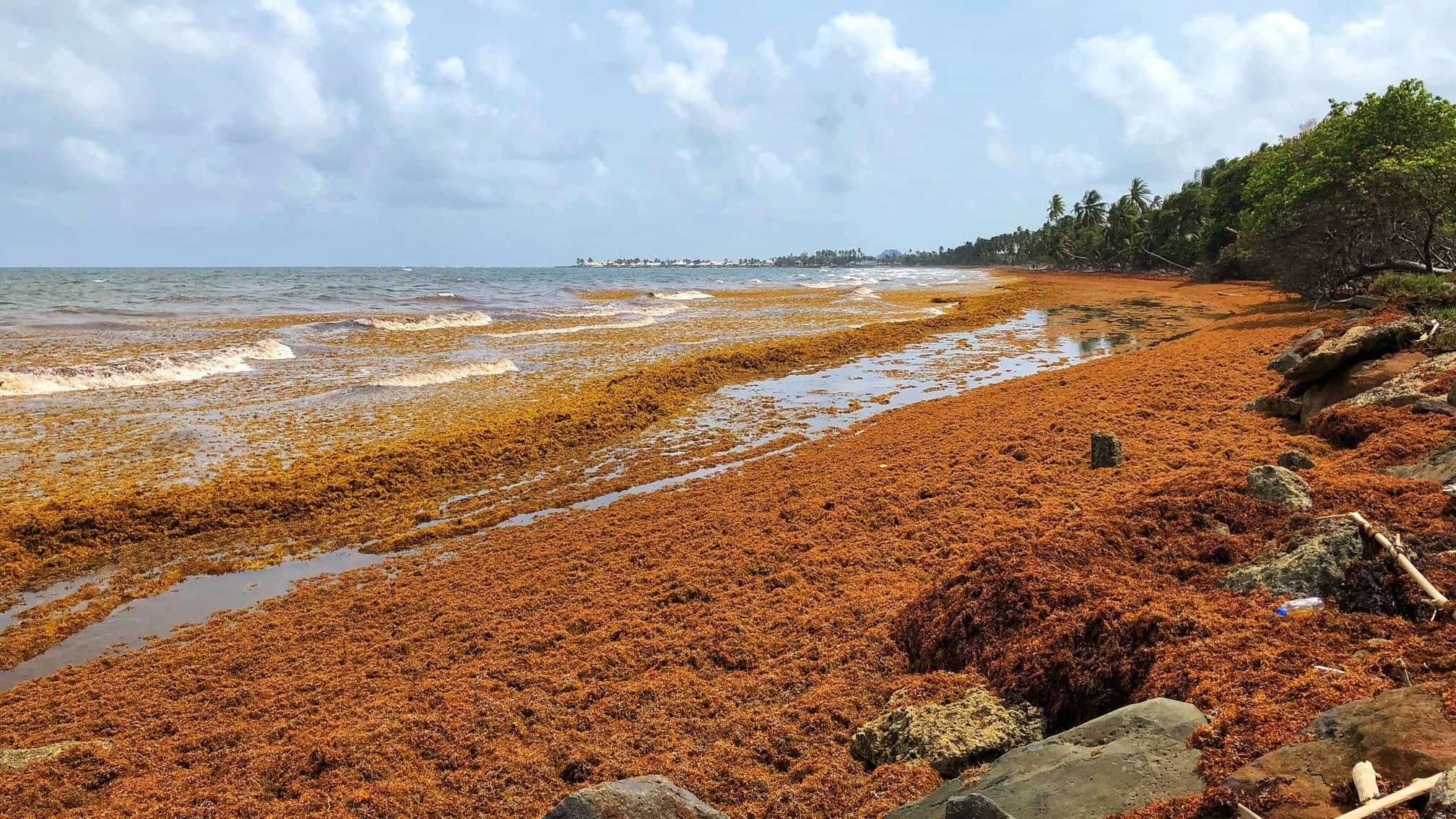 Another ‘Golden Tide’ on our Shorelines

For yet another year, massive quantities of Sargassum are seen washing up along our coasts and is causing concerns among fishers and other beach users.   This new source of sargassum is now linked to climate change and ocean eutrophication, and these are likely to continue supporting significant sargassum blooms into the future. As such, annual mass influxes of sargassum into the Caribbean Sea are now being considered as the ‘new normal’, requiring sustainable management responses and long-term adaptation (Desrochers et al. 2020).

Pelagic (free-floating) sargassum, a brown alga from the equatorial Atlantic, comprises a mixture of two or possibly three different Sargassum species namely Sargassum fluitans III, Sargassum natans I, and Sargassum natans VIII (Schell, Goodwin, and Siuda 2015) that forms large floating mats often referred to as “golden tides”.  These species are unique in that they are the only Sargassum species to spend their entire lifecycle afloat, instead of attached to the seafloor. As such, they are considered to be ‘holopelagic,’ and to only occur in the Atlantic Ocean (Desrochers et al. 2020). The Atlantic holopelagic sargassum is also thought to only reproduce vegetatively through growth and fragmentation, and is able to double its biomass very quickly under the right conditions (9-20 days; Hanisak and Samuel 1987, Lapointe 1986).

Field surveys and satellite maps have indicated that Sargassum blossoms naturally in the warm waters of the Atlantic Ocean; the Tropical South Atlantic and in the North Atlantic including the Sargasso Sea.  Since 2011, there have been several episodes of unusual quantities of Sargassum reaching the coasts of many of the islands of the Caribbean Sea and West Africa but where is it coming from?

In 2013 satellite images, Sargassum was seen concentrated in the tropical North Atlantic over 600 km offshore from South America, to the north and west of the mouth of the Amazon River. For about 18 months prior to landing in 2013, back traces from the Sargassum sighting location were made using a high-resolution numerical ocean current model, which pointed to waters near the North Equatorial Recirculation Region (NERR) (Johnson et al. 2013). Sargassum may be aggregating in the NERR region and blooming there. More recent satellite images revealed increasing trends in Sargassum amounts in both the tropical Atlantic and the Caribbean through 2018. Floating sargassum travels with ocean currents and is influenced by surface winds. However, the currents that have resulted in the movement of more Sargassum into the Eastern Caribbean and Northwest African coastlines are not clear at this time (UNEP, 2018).

Massive sargassum pile up has disrupted fisheries, had devastating impacts on tourism, damaged critical nearshore ecosystems and coastal livelihoods, as well as caused significant health problems for populations exposed to rotting sargassum (UNEP 2018). The ecological impacts is still being assessed, but massive influx of Sargassum has resulted in potential disturbance of marine life, beach fouling, and coastal dead zones. The accumulation and decay of large amounts of Sargassum in the water can result in anoxia and the release of poisonous hydrogen sulphide, potentially causing the death of marine life. Entanglement of foraging turtles in the Sargassum rafts, and blockage of turtle nesting sites by the seaweed that covers the beach also represents a threat to turtle populations, with Trinidad and Tobago being one of the largest Leatherback turtle nesting site in the Atlantic.

The current cost and manpower required to repeatedly clean and dispose of stranded sargassum is unsustainable.  Furthermore, the cost to the national economies of many countries from lost revenue in the tourism industry in particular, and in fisheries and other coastal livelihoods is substantial and a matter of significant concern (Desrochers et al. 2020). As such there is a rapidly growing interest across the region in turning this hazard into a benefit by developing industries that can utilize stranded sargassum as a raw material (e.g. UNEP 2018).

Many entrepreneurs and research teams across the wider Caribbean region have been working arduously over the past few years to raise funds and develop innovative businesses and projects to use sargassum as raw material for the pharmaceuticals, food, cosmetics, textile, medical, agricultural, paper, construction, bioenergy lubricant, adhesive and bioplastic industries (Desrochers et al. 2020). The Centre for Resource Management and Environmental Studies (CERMES), University of the West Indies, Barbados has created a comprehensive Sargassum Uses Guide that showcases innovative and economic solutions on the various uses of sargassum, and provides an entrepreneur directory (Desrochers et al. 2020). However, there are major constraints experience by sargassum entrepreneurs, business owners and researchers from around the region and these are grouped into five broad categories; unpredictable supply, chemical composition, harvest, management and funding.

Substantial funding has been mobilized to support many initiatives across the Caribbean region aimed at addressing one or more aspects of sargassum influxes. These include

However, most funding provided until now has been invested in research and education initiatives, rather than towards the commercialization of sargassum. Some current challenges to achieving commercialization include the fact that the Caribbean region is characterized by cumbersome bureaucratic procedures for launching, operating, and growing start-ups (Desrochers et al. 2020), which provides enormous hurdles particularly for small and medium sized enterprises. This is often exacerbated by burdensome taxes and the poor state of infrastructure.

Therefore, there is a strong imperative for the public and private sectors to form partnerships and create an entrepreneurial ecosystem to enhance sustainable sargassum industries that can create jobs, build economic capacity, and capture market segments, all in a sustainable manner (Desrochers et al. 2020). The opportunities for sargassum innovations can be packaged as blue growth initiatives, which can be integrated into blue economy strategic frameworks and road maps on the policy-level (Hassanali 2020). This can support economic diversification and resilience to reduce economic vulnerability in the face of harsh climate risks (Desrochers et al. 2020,) and a post-COVID 19 economy.

Beyond the Blue – Season 3 Episode 1