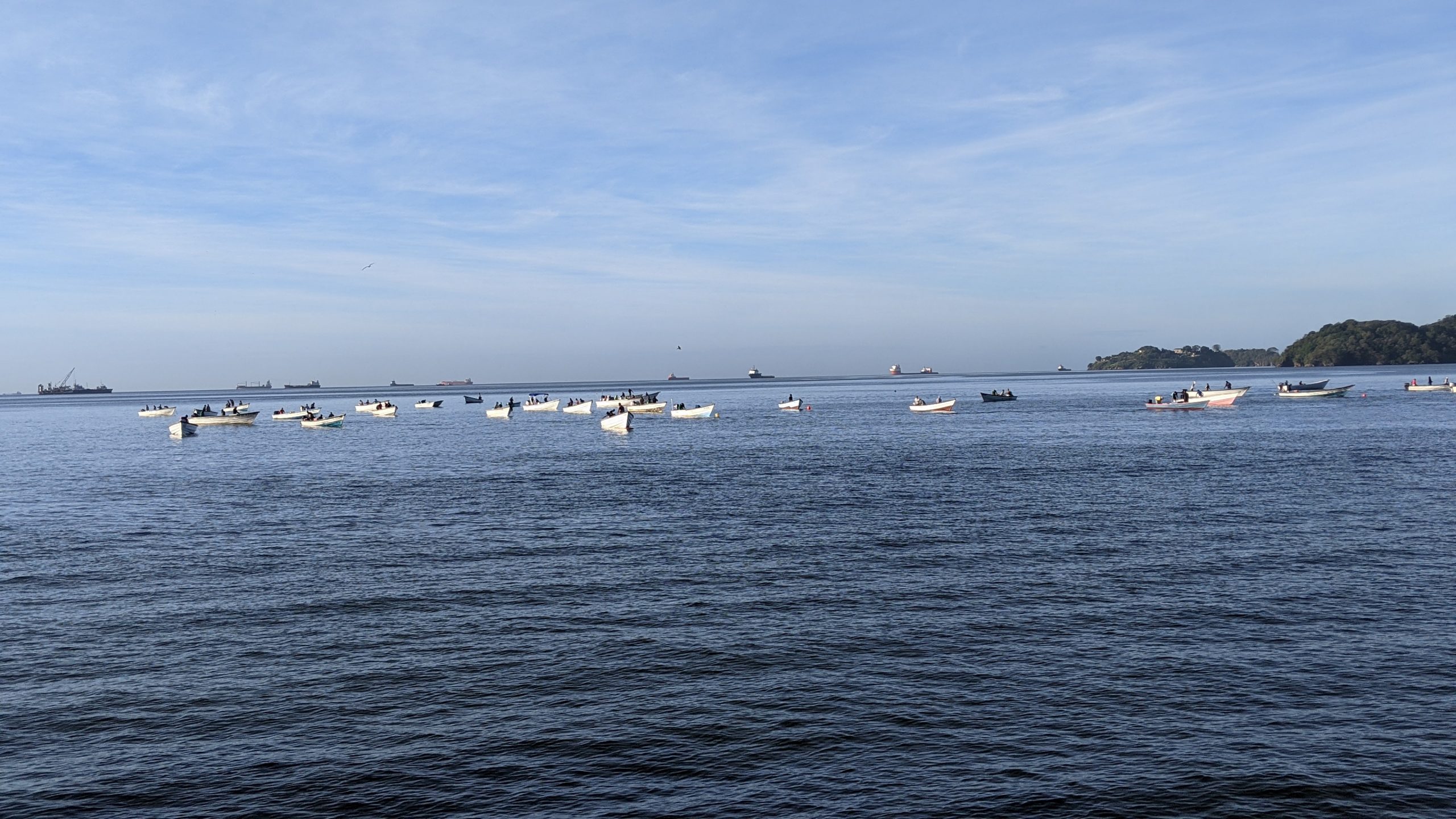 Persons driving into Chaguaramas in December 2020 and January 2021 were greeted with the sight of numerous fishing vessels operating close to shore in the vicinity of Alcoa and in William’s Bay. Enquiries by any curious onlooker would have revealed that they were fishing for “cutlassfish” in the late evenings, nights and early mornings. I myself was intrigued by this activity having never seen so many vessels operating in that area. On one occasion, I counted as many as 80 pirogues. Since then, I have fielded numerous questions from both colleagues and the public about the particulars of this fishery and the role of the IMA in managing these resources. There have also been numerous discussions on several social media sites on its sustainability and the need for regulations. In this article, I attempt to address some of these questions and issues.

Globally, the term cutlassfish collectively refers to fishes belonging to the Family: Trichiuridae; there are about 45 types, all of which are long, slender and flattened side to side like a ribbon1. The absence of pelvic fins and a tail fin, coupled with a dorsal fin that extends almost the entire length of the body, gives it an “eel like” appearance. Other common names for cutlassfish are beltfish, ribbonfish, knifefish and silver eel. Our cutlassfish is one species – Trichiurus lepturus, known internationally as the largehead hairtail.

Cutlassfish is widely distributed in both temperate and tropical seas in the Atlantic, Indian and Pacific oceans; here in the western Atlantic they occur from Virginia, USA to northern Argentina2, in both shallow and deep-waters. Their long pointed “fang-like teeth” reflect their carnivorous feeding habits, mainly on fish, crustaceans and molluscs. Some studies have found that fishes such as sardines and anchovies– which we use as bait fish – are a large part of their diet3.

Traditionally, there has been no local fishery targeting cutlassfish, rather, cutlassfish has been caught as bycatch by a number of gears including trawl, gillnet and hook and line. Catches were either discarded or large ones taken to the market or retained for home consumption.  Vendors would tell you that it is mostly the Chinese community that would purchase this fish at the market. This is not surprising as throughout China it is the most popular fish on the table. Known as “daiyu” it is deep-fried, sautéed, braised, grilled or red cooked. It is also popular in other parts of Asia such as Korea, and in Japan, where it is served raw as sashimi.

In keeping with its culinary popularity, commercial fisheries for T. lepturus occurs throughout its range in countries such as China, India, Pakistan, Oman and Cote d’Ivoire where they are caught using a variety of gears. Globally. marine capture production of T. lepturus averaged 1, 326 000 tonnes live weight during the period 2004 – 2013. In 2018, annual capture production was 1,151 000 tonnes representing 2 % of finfish marine capture production4 – this is significant.  In terms of weight, it is the most important finfish caught in China, and while it is consumed wherever it is caught, there is evidence to suggest that the demand for export to China and other South East Asian countries, maybe stimulating the development of this fisheries in other countries.

What about locally? How much is being caught? The answer is, we do not know. Currently, little or no catch and effort data is collected by the local authorities as much of the fish is landed and sold outside designated landing sites where data collection usually occurs. There are additional complexities as the fishery appears to be transient, following the migratory movement of the fish along the west coast. For example, one week fishing occurs in Chaguaramas, and the next week in Carli Bay or Claxton Bay.  Informal discussions with fishers revealed that during peak activity in December 2020, a single boat caught about 500 to 1000 lbs per night.  It had  a guaranteed market as all the fish was sold to a single vendor for export; $7-$8 a pound for fish caught by line, $ 3 a pound for fish caught by net. The reported destinations were Miami and China.

Locally, much of our commercial fish stocks are either over-exploited or fully exploited. Given the intensity of the fishing effort observed, as well as the absence of landings data, further investigations into the characteristics of this emerging fishery is certainly warranted.  What is the role of the IMA in this process? Though the Fisheries Division, Ministry of Agriculture, Land and Fisheries has the primary responsibility for sustainably managing our fisheries resources, the IMA has a critical role to play in providing information essential for management. The Institute provides information on fishing activities and key life history characteristics of fished species, and identifies and maps fishing areas and other critical habitats. This information can then be used by the Fisheries Division to guide the development of regulatory measures to prevent over-exploitation of these resources. Key life-history characteristics such as age and growth, size at sexual maturity, spawning season and reproductive strategy often form the basis of  open and closed seasons and spatial and catch size limits.  For example, closed seasons are implemented to protect fish when they are in spawning (egg laying) mode and many spatial regulations are designed to protect critical habitats such as nursery areas and spawning grounds.

There have been numerous studies on the biological characteristics of T. lepturus elsewhere, however these biological parameters appear to be quite variable throughout its range and heavily dependent on environmental parameters. For example, size at sexual maturity (length at which 50 percent of the individuals caught are sexually mature) for females was 69 cm in South Brazil5, 45 cm in Cote d’Ivoire6 and 79 cm in Oman7. Some degree of variability is also seen in growth rates and in spawning season and fecundity (number of eggs produced per spawning event). In some areas, spawning appears to occur all year round with no defined period, while in others  spawning takes place over a shorter period of time like late spring and early summer5-7. This variability emphasizes the need for studies on our local populations.

Also of concern locally is the heavy exploitation of large schools of cutlassfish close to shore at certain times of the year as was seen in the months of November, December 2020 and January 2021. According to the literature, migrations from offshore waters to inshore waters can occur for several reasons including spawning and feeding8. This is something that needs to be investigated as heavy fishing of spawning aggregations can negatively impact fish stocks.

Overall, there are there are many factors that have to be considered when managing a fishery, including the socio-economic and livelihood aspects.  Given that the cutlassfish fishery is being regarded as one for potential development, it is important that the characteristics of this fishery be investigated and the need for regulations if any determined and implemented before further development.

Another ‘Golden Tide’ on our Shorelines

The Door to Happiness opens into Nature!