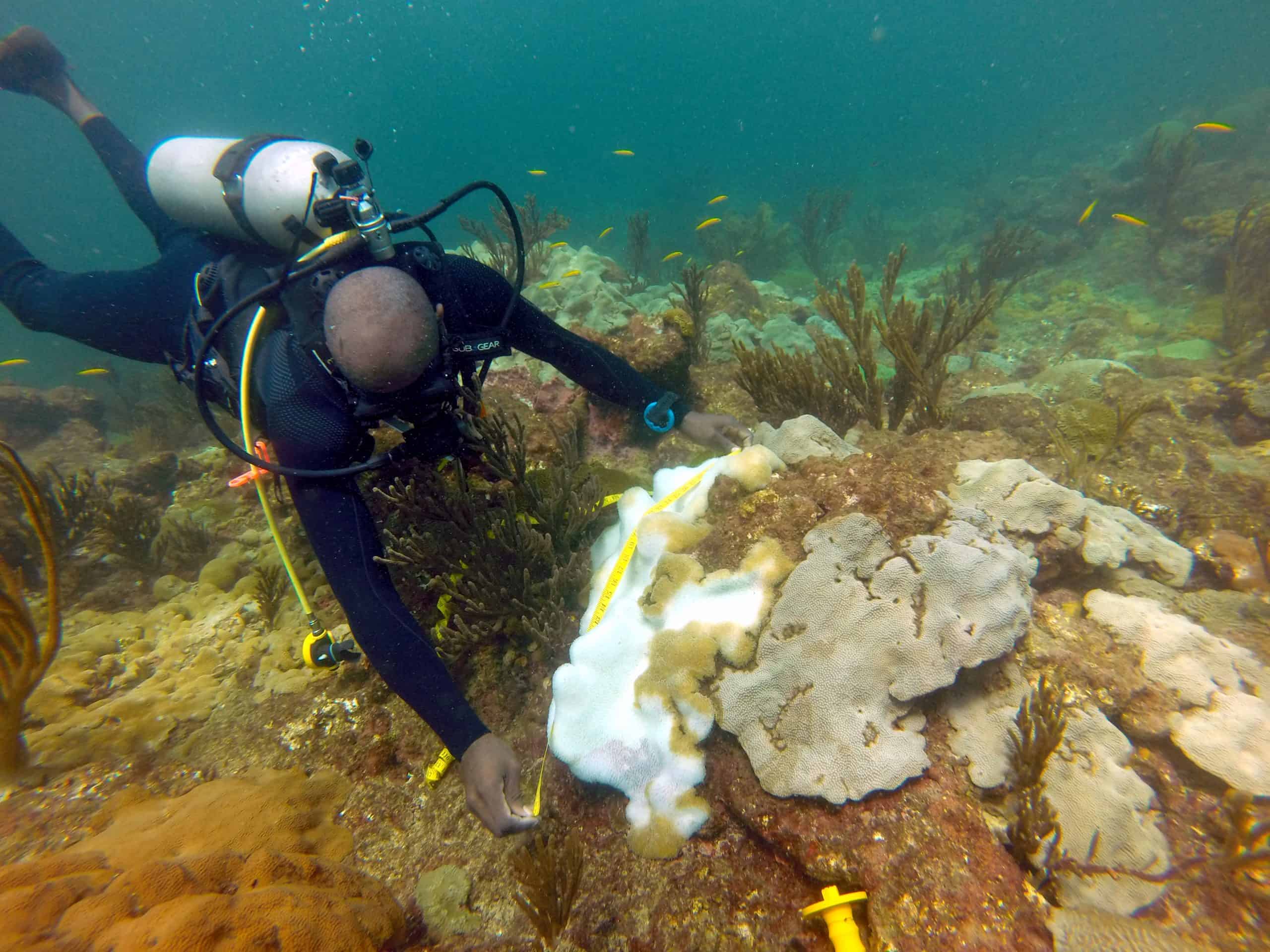 Tobago is currently under severe Bleaching Alert Level 1. This means that the ocean surface temperatures are warm enough to cause significant bleaching across species and over extended areas. These warm temperatures are predicted to be sustained for the next month. The IMA has been receiving coral bleaching alert warnings every year for the last three years. This is a concerning trend as we haven’t experienced such back-to-back Alert Level warnings since the major coral bleaching event of 2010. This year bleaching has already been reported in the shallow sections of the reefs along several sites in Tobago in specific coral species.

Coral reefs line the shallow waters of Tobago’s coast. Tropical coral reefs thrive under tropical temperatures of 23 – 29° C in clear waters. The symbiotic relationship that corals have with the algae that live in their tissues, allows them to be supplied with a constant supply of food through photosynthesis, and gives the coral their bright colours. This also means that corals can thrive in low nutrient environments. In return, the coral host protects and removes the algae’s waste among other things. However, when water temperatures get too warm, the relationship between the algae and coral becomes stressed and the coral expels the algae. As corals get their bright corals from the algae, when the algae are expelled, the corals appear white and this is called coral bleaching.

Coral reefs around the world have already suffered widespread die offs from bleaching events with only a 0.67° C rise in average sea surface temperatures. It is expected that a rise in temperatures of 1.5° C will result in the loss of 70 – 90 % of coral reefs worldwide (IPCC SR1.5). Most at risk are unprotected coral reefs, exposed to human activities and not well managed, such as those of Trinidad and Tobago.

Our most severe recorded bleaching event to date occurred in 2010 where thermal temperatures soared and persisted at Bleaching Alert Level 2 for ten weeks. This resulted in the die off of about 50 % of hard corals along several reefs around Tobago. Following this bleaching event, coral diseases proliferated on weakened corals and contributed to the death of corals. Many of the diseases first discovered on the reefs post 2010, such as yellow-band disease, persist to this day. Warming conditions along with nutrient pollution have promoted the spread of coral diseases throughout the Caribbean. The latest disease called the Stony Coral Tissue Loss Disease that originated in the Florida Keys in 2014 has resulted in the decimation of certain coral species. This disease targets many of the boulder and brain coral species that are most common on Tobago’s reefs. Since 2014, the disease has been spreading rapidly throughout the Caribbean with sighting as close as Grenada. It will be only a matter of time until it reaches our shores. Currently, Trinidad and Tobago is not prepared for a major disease outbreak such as this since there is no management or rehabilitation framework in place.

Our coral reefs are a major source of ocean biodiversity that supports our fisheries and food industry, stocks for pharmaceuticals (much of the chemicals found on coral reefs are used as anti-viral and anti-bacterial medicines). The same biodiversity is a major draw for our tourism economy and important for coastal protection, especially the low-lying south portion of Tobago, where sea-level rise is expected to have greater impact. Also shifting are the demands of our visitors, who are preferring to go to places that are actively protected with healthier biodiversity and where their contributions go back to management.

The main goal of COP 26 is to “secure global net zero carbon by 2050 and keep 1.5 degrees within reach.” As a Small Island Developing State, we are particularly vulnerable to a climate above 1.5° C with increasing sea level rise, exposure to extreme weather events and biodiversity loss. Trinidad and Tobago along with other island nations must demand commitments from the world’s biggest polluters, while preparing ourselves for climate mitigation and adaptation. Global net zero by mid-century requires serious overhauls in world energy, manufacturing and food industries that continue to be heavily reliant on fossil fuels. Twenty-nine years is not a lot of time for these changes, yet it needs to be done for the sake of our lives and livelihood. We are currently on track for 3° C global temperature rise by the end of the century.

The second major goal of COP 26 is to “Adapt to protect communities and natural habitats” and a major component of this is to protect and restore our natural ecosystem. This is where the IMA hopes to be able to contribute. We are working to build our capacity to assist in rehabilitation and restoration of marine ecosystems, but this must go hand in hand with adaptive management.  We are already seeing the consequences of only one-degree global temperature rise, and unfortunately it will continue to be felt for centuries by future generations until emissions are not just halted but reversed. The IMA is working with international agencies such as SECORE International to apply research methods for successful coral restoration. Unfortunately, while restorations have become essential for sustaining populations, this is only a stopgap measure with respect to climate change, to ensure the reefs have surviving populations for long-term viability. Most important are the global efforts to reduce carbon emissions and the local efforts to protect and manage reefs to build natural resilience to climate change.

Reports can also be made via:

Department of Marine Resources and Fisheries, Tobago House of Assembly