IMA > News  > Rip Currents! We must Exercise Caution on our Beaches! 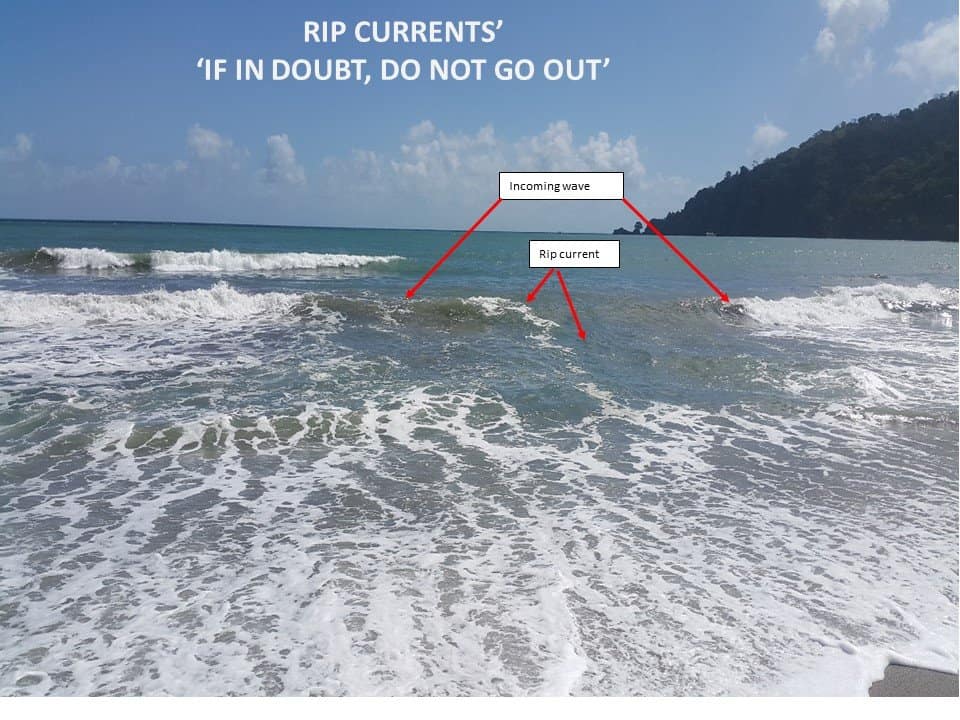 Rip Currents! We must Exercise Caution on our Beaches!

Trinidad and Tobago’s beaches have been re-opened after a lengthy closure because of the COVID -19 pandemic. Our citizens may once again enjoy the coastal waters that surround our twin island republic. Notwithstanding our love for the sea, the Institute of Marine Affairs strongly advises that the public exercise caution on the nation’s beaches, particularly over this Easter weekend, as our heightened excitement may reduce our awareness of the coastal environment.

During the year from an oceanographic perspective, there are the summer (May to October) and the winter (November to April) periods. The summer months have characteristically smaller waves (lower wave energy) and generally create safer bathing conditions as the coastal waters are calmer, although there is the possibility of the infrequent storm. Throughout the winter months the waves are larger (higher wave energy) and bathers should pay attention to sea conditions as the likelihood of strong nearshore currents (e.g. rip currents) is increased.

Rip currents usually occur in close proximity to breaking waves and are common within pocket beaches with moderate to high wave energy. In Trinidad, these beaches may be found on the north coast (e.g. Maracas and Las Cuevas) and along the unsheltered east coast (e.g. Mayaro). In Tobago, rip currents may occur on most beaches that are not protected by coral reefs. These currents are dangerous and contribute to drowning occurrences annually particularly during celebratory times of the year.

Rip currents
Rip currents are powerful flows of water moving seaward that can effortlessly drag unsuspecting bathers quickly out to sea. They characteristically extend from the shoreline, across the surf zone (the area of breaking waves bounded by the point of first breakers, then landward to the maximum uprush of waves on the beach), and beyond the line of breaking waves.
The term rip currents are sometimes interchangeably used to refer to rip tides, undertows or undercurrents but this is incorrect:
Rip tides – includes both ebb and flood tidal currents that are caused by egress and ingress of the tide through inlets and the mouths of estuaries, embayments and harbours. These currents may cause drowning deaths, but these tidal currents or jets are a separate and distinct phenomenon from rip currents.
Undertow – a process related to waves breaking on the beach where an imbalance of pressure allows water to flow back out to sea under the waves. It can cause a tug at your legs.

How do they form?
Rip currents form as waves dissipate along the beach causing water to become trapped between the beach and a sandbar (sand from the shore that washes away and accumulates under the sea surface offshore) or other underwater feature. When waves break over the sandbar in quick succession, water builds up rapidly and is blocked from returning seaward. The water is trapped between the sandbar and the shore until it is high enough to create a current which flows seaward, creating a channel through the sandbar. This is called a rip current.

The water converges into this narrow channel moving away from the shore at high speed. A rip current consists of three parts: the feeder current flowing parallel to the shore inside the breakers; the neck, where the feeder currents converge and flow through the breakers in a narrow band or “rip”; and the head, where the current widens and slackens outside the breaker line. Rip currents can occur at any beach with breaking waves. Jetties projecting out to the sea can also cause rip currents to occur because they divert the normal flow of water.

How do you identify and avoid rip currents?
The best way of avoiding rip currents is to learn how to avoid them. It is important that you observe the prevailing water conditions when visiting the beach, obey the lifeguards and keep away from the red flag areas. Remember, if lifeguards can’t see you, they can’t save you.
However, if you visit a beach that does not have an attending lifeguard, the following are visible signs from the shore that will make it easy to identify the existence of rip currents:
• Areas of choppy waves – resembling the surface of water seen in an agitated washing machine
• A line of seaweed or floating debris extending seaward – you are witnessing items brought over the sandbar with the waves washing back to sea with rip currents.
• Cloudy areas of water/sand plumes – may indicate that a rip current is forming as sand is washed from the bottom as water heads seaward.
• Additionally, a bathing area with potholes, moving sand and a strong movement of water seaward indicates the presence of a rip current.

What to do if caught in a rip current?
Remain calm! Panicking will cause unnecessary exhaustion and fatigue; in so doing, increasing your risk of drowning. You should swim parallel to the shore until you are out of the current, then turn and calmly swim to shore. Do not swim against the rip current – this is dangerous. If someone is caught in the current, floatable items such as cooler covers and boogie boards can be thrown to the person to lend assistance.
Safety tips:

• Learn to swim
• Generally, it is advised that non-swimmers not bathe beyond waist depth.
• Bathers should not float for fun on rubber tyres and other inflatables under strong current conditions.
• Never swim under the influence of alcohol
• Stay out of the water for at least one hour after consuming a heavy meal.
• Never swim alone
• Note the red flags (they indicate dangerous areas to bathe).
• Swim between the red/yellow flags (areas for safe bathing). Ask the lifeguards on duty if you are not sure what the flags mean.
• For maximum safety, swim near a lifeguard
• Obey all instructions and orders from lifeguards. Local residents usually know of rip currents and other hazards – ask them
• Be cautious, observant and aware of your surroundings at ALL times
• Don’t assume! Great weather for the beach does not always mean it is safe to swim or even play in the shallows. Rip currents can form on clear and sunny days.
• If in doubt, DO NOT go in!

Groundwater: out of Sight but not out of Mind