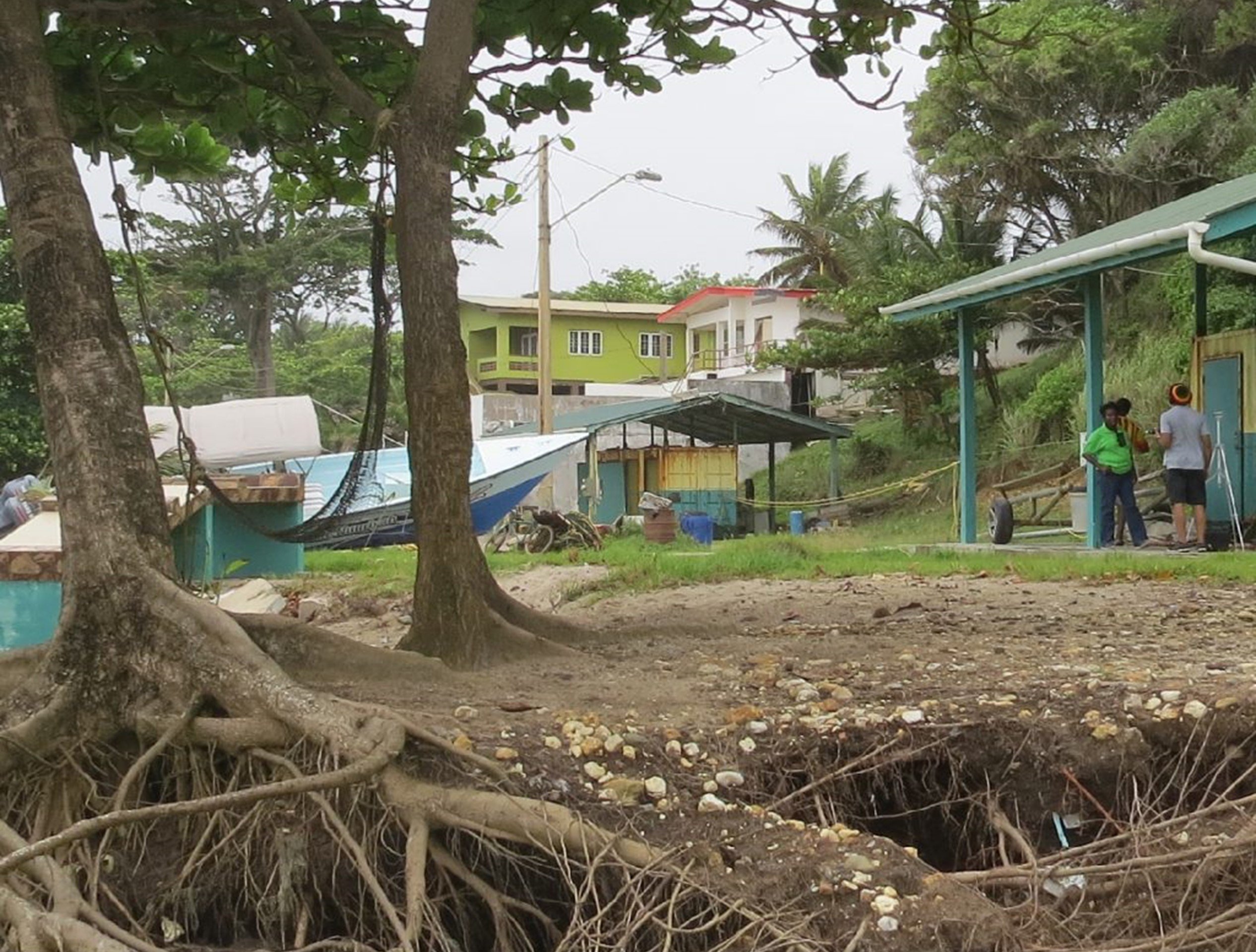 Algal blooms are observed when microscopic plants or phytoplankton, which are normally found in seawater, rapidly reproduce when environmental conditions are favourable. The blooms have been described as unusual green, pink or red patches of water. The discolouration is due to pigments in the cells of the alga.

Algal blooms can cause death to marine life by depleting oxygen levels during decomposition, producing toxins that can poison animals or by clogging of gills. Not all blooms are harmful though and many disappear within a few hours with no fatal effect to marine life. Algal blooms have been reported on all coasts of Trinidad and Tobago and are sometimes associated with fish kills.

Erosion of beaches may be both natural and human-induced and is a result of loss of sediment. Natural erosion is caused by the impact of waves. Beaches are dynamic, with normal fluctuations in sediment levels during the course of a year. Typically, there is ‘natural’ erosion during the stormy months (November to April) with recovery during the calmer period (May to October). These systems are described as being in ‘dynamic equilibrium’. Where recovery does not occur or erosion is exacerbated due to human activities, beaches become unstable and shoreline retreat follows.

The closure zone is demarcated on its seaward margin by an imaginary line beyond which there is no onshore movement of sand. In addition, improper and excessive cross-shore drainage can lead to the migration of sand offshore. Sometimes coastal structures intended to protect property have the unintended effect of exacerbating wave energy and result in beach erosion. In addition, it is thought that the extraction of fuels in marine sediments (oil and gas) since the 1960s may have led to subsidence of nearshore areas and coastal erosion.

In Trinidad the areas most significantly affected by coastal erosion are along the south coast, the southwestern peninsula and certain sections of the west and east coast. In Tobago however, one of the main influences on coastal erosion is the quarrying of beaches and rivers for construction aggregate. Coastal erosion reduces the aesthetic value of the beaches, hampers tourism and associated recreational activities, weakens bridges and other structures, undermines the stability of coastal roads and causes loss of habitat.

Beach sand mining is prohibited in Trinidad and Tobago but still occurs, especially in Tobago because of the lack of naturally occurring aggregate. Some beach sand, because of its composition, is added to the mortar mixture used for homes and other structures. The practice of beach sand mining however, causes beach erosion; removal of natural beach vegetation; disrupts beach habitats and nesting grounds of marine turtles; increases the impact of waves along the coastline; and leads to salt water intrusion.

Seawalls, groynes, breakwaters and revetments are some of the coastal protection structures seen along the shoreline of Trinidad and Tobago. In cases where beach erosion is taking place and infrastructure, such as roads and buildings, is threatened, these protective structures may be built with the aim of preventing erosion. Coastal protection structures are known as hard stabilization as they use any method of holding the shoreline in place using “hard”, fixed structures. They tend to be expensive to produce and maintain, and are often not aesthetically pleasing. In some cases they can even lead to a loss of recreational beaches.

Competition for limited land space, especially along the northwest coast of Trinidad, has given rise to coastal reclamation. The effects of this include habitat loss (e.g. mangroves), sedimentation of nearby beaches and loss of valuable beachfront. In addition, heavy rainfall may result in the erosion of loose soil into adjacent waters resulting in the smothering of nearby seagrass beds, as happens in the Gulf of Paria.

Coastal structures such as groynes, seawalls and revetments are used to protect reclaimed areas from the influence of strong waves. Beach-goers may notice these structures around the coastline of Trinidad and Tobago.

The foreshore seaward of the high water mark cannot be privately owned, and is vested in the state. According to the Town and Country Planning Division, no structures may be built within 30 m landward of the high water mark. The dangers of building within this zone include increased vulnerability to storm surge and erosion. Structures in the active beach zone are illegal and can result in loss of amenities to other users as well as erosion.

Developers often seek a relaxation of the setback. The IMA advises the Town and Country Planning Division in these cases, suggesting relaxation of setback only in very rare cases.

Coral reefs, seagrass beds and mangrove swamps have closely interwoven functions when they occur adjacent to each other. The Buccoo Reef and Bon Accord Lagoon Complex, located on the leeward coast of southwestern Tobago is the best local example of these contiguous coastal ecosystems. Recognition of the resource value of the Buccoo Reef system resulted in its designation in 1973 as the country’s only marine protected area under the Marine Areas (Preservation and Enhancement) Act of 1970.

Mangroves swamps, seagrasses and coral reefs provide food sources and shelter to a wide variety of animals and plants. In 2000, approximately 119 fish species were recorded in Buccoo Reef and Bon Accord Lagoon, with 102 species over the reef and more than 45 over the seagrasses and in the mangrove. In addition, coral reefs, seagrasses and mangroves protect the coastline from erosion and perform other functions.

Unfortunately, these ecosystems are threatened by many of our activities. Visitors to our coastal areas need to recognize the fragility of these systems and to learn to enjoy them with minimum disturbance.

Fish kill events have been recorded in Trinidad and Tobago. They may have a variety of causes, both natural and man-made. Man-made causes include oil spills, sewage pollution, discarded fish catch, and chemical leaks into the marine and coastal environment. Natural causes include algal blooms and waterborne pathogens.

The United Nations’ definition of marine pollution is ‘the introduction by man, directly or indirectly, of substances or energy into the marine environment resulting in such deleterious effects as harm to living resources, hazards to human health, hindrance to marine activities including fishing, impairment of quality for use of sea water, and reduction of amenities.’ This definition is restricted to pollution caused by man for which he has control for abatement. The main types of pollutants affecting our marine environment are:

1) organic pollution which may come from sewage, waters discharged from food processing plants, sugar refineries and rum and beer distilleries;

2) plant nutrients, such as fertilizers;

3) toxic substances, which include many industrial wastes such as trace metals and petroleum hydrocarbons, and agricultural pesticides and herbicides;

7) pathogenic organisms including viruses and bacteria.

In Trinidad and Tobago all seven categories of marine pollution can be found at various locations around the coasts. After periods of heavy rainfall there may be elevated levels of pollutants in some bays due to runoff from the land.

Oil spills have serious effects on the marine and coastal environment and can impact upon coastal activities. This is a significant area of concern for Trinidad and Tobago as most of the energy resources that we exploit actually come from marine areas. In addition, many fuel-carrying vessels transit our territorial waters. Our marine and coastal areas are vulnerable to oil spilt as a result of accidents involving oil tankers, storage tanks and pipelines. While damage is sometimes temporary and caused primarily by the physical properties of oil, negative effects may also be long-term. Full recovery may take many years. The physical properties of oil may create nuisance and hazardous conditions while its chemical composition may create toxic conditions. Some ecosystems, such as mangrove swamps are particularly vulnerable to oil spills. Damage to the environment can often be minimized if the right action is taken promptly. If you see evidence of an oil spill you should immediately notify the Trinidad and Tobago Coast Guard, Institute of Marine Affairs, or the Environmental Management Authority.

Beach-goers are always advised to take a garbage bag, since much solid waste e.g. bottles, plastic wrappers, aluminium cans, Styrofoam containers and paper, is generated by visitors. Filled garbage bags should be disposed of in appropriate bins or taken back home. Garbage left on the beach is not only unhygienic but it may be strewn about by animals; blown to other sites; washed further ashore by the waves or eventually clog waterways.

Marine debris may wash or blow into the sea from a number of other sources e.g. landfills, sewer systems, and industrial outfalls. Garbage dumped further inland may be flushed out to sea by rivers and waterways, only to be washed back up onto beaches by the incoming tide.

Marine debris can harm animals and people. It can negatively affect fishing activities and damage ships and fishing vessels. Fishermen, divers and boat owners are at risk when their boats are disabled. Marine life may become entangled in discarded nets or lines, leading to strangulation, suffocation or drowning, or they may ingest debris and as a result be poisoned, suffocate or starve. Sharp objects can injure them. Driftwood and other objects can obstruct sea turtles as they attempt to nest.

Whale strandings have been reported around the coasts of Trinidad and Tobago. On the west coast at Orange Valley, Brickfield and Waterloo, pilot whales have been stranded. On the east coast at Cocos Bay and Point Galeota, both pilot and humpback whales have been stranded. At Barbados Bay, on Tobago’s windward coast a pygmy whale was beached. There is no single explanation for whale stranding and very little is known locally about these mammals in Trinidad and Tobago’s waters. Persons who encounter a stranded whale should immediately notify the Wildlife Section of the Forestry Division, the Institute of Marine Affairs, the Marine Mammal Stranding Network, or the Trinidad and Tobago Coast Guard.

What does an oasis and a coral reef have in common?